Australia were chasing 241 runs for victory in the second Hobart Test after New Zealand were dismissed for 226 at lunch on the third day on Sunday. 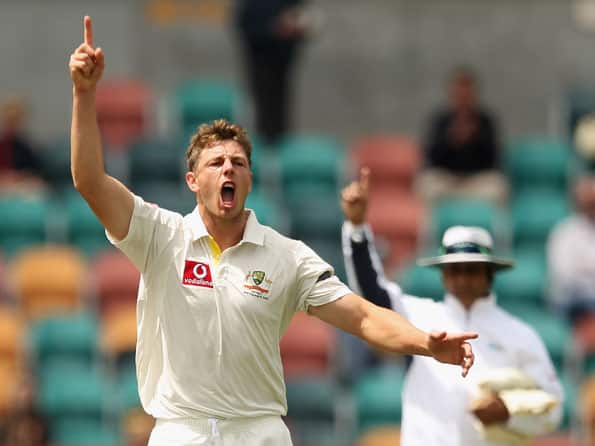 Australia were chasing 241 runs for victory in the second Hobart Test after New Zealand were dismissed for 226 at lunch on the third day on Sunday.

The Kiwis, leading by 14 runs on the first innings, lost seven wickets in the extended morning session after resuming the day at 139 for three.

The Black Caps unravelled after the loss of skipper Ross Taylor and Dean Brownlie, with their frail tail throwing the bat at the Australian bowlers.

Australia will be looking to wrap up a two-nil series victory after hammering New Zealand by nine wickets in last week’s first Test in Brisbane.

Taylor topscored with 56 off 169 balls but once he departed along with first innings topscorer Brownlie (21), the Kiwi innings quickly fell away.

Kane Williamson was out on the third ball of the day, brilliantly caught by a diving Ricky Ponting at second slip off Siddle for 34.

Taylor was dropped on 48 in a sharp caught and bowled chance by Pattinson before he brought up his 15th Test half-century off the next ball.

But Taylor’s resistance ended in the 63rd over when he nicked a Pattinson outswinger to Michael Clarke at first slip.

Brownlie, who was hit on the left hand by a Mitchell Starc delivery, tried to get out of the way off a Pattinson bouncer only to be caught behind off the back of his bat for 21.

New Zealand were into their tail, minus injured Daniel Vettori, as they sought enough runs to defend in the fourth innings of the Test.

Wicketkeeper Reece Young was out 15 minutes before lunch, lbw to Siddle for nine, but Tim Southee (13), Doug Bracewell (4) and Trent Boult (21) were out slogging spinner Lyon.

A total of 30 wickets have fallen in seven sessions with a result possible on the third day if rain does not intervene. (AFP)

How Rohit Sharma got a thinner frame