India bundled out for 202, New Zealand falter to score 15 for four at lunch.

New Zealand have taken a 316-run lead after they bundled out India for 202 on Day Three of the first Test at Auckland. The Indian pacers struck back picking three wickets assisted by some brilliant fielding. But the Kiwis still hold control of the match with a massive lead. New Zealand are on 15 for four.

India resumed the day on 130 for four with overnight batsmen Rohit Sharma and Ajinkya Rahane well aware that the conditions were tilted in favour of the pacers. It had rained the previous evening and there was enough moisture in the wicket. Tim Southee and Trent Boult started off impressively with the latter moving the ball away from the batsmen while Southee swung it in. Rohit and Rahane did well not to fiddle with anything outside off. But the patience went begging when Rahane tried to drive at a delivery and ended up edging it to slips. Rahane’s dismissal for 26 was just the start of a flurry of wickets at regular intervals.

Southee welcomed the Indian skipper MS Dhoni with a few rippers, pitching it on off and moving it away from him. The batsmen were clearly faltering in applying themselves. Despite a well compiled 72, Rohit still gave away his wicket after Boult’s delivery moving into him took the thick inside edge and disturbed the stumps. The two needless shots had once again pegged India back and the follow on fears were alive.

The first boundary of the day came from Ravindra Jadeja which brought up India’s 150. But India needed much more of that to progress ahead. Dhoni was still nervous after being beaten consistently. He edged Corey Anderson between the keeper and the first slip and survived the easy caught behind chance. But he didn’t last long when another probing delivery on the off-stump saw Dhoni caught behind for 10 off Wagner.

The floodgates had opened as Jadeja was left with the tail. Zaheer played a small cameo hitting three boundaries for his 14 before edging Wagner to BJ Watling. The pacers reaped the rewards of keeping the length full and inviting the batsmen to play at it.

With eight down for 188, a huge first innings lead was in the offing for New Zealand. Ishant Sharma too perished for a two-ball duck and Wagner finished off the innings by packing off Mohammed Shami.

McCullum decided against enforcing follow-on, but it seemed to be a poor decision considering the way they ended up at lunch. Shami removed Hamish Rutherford for a first-ball duck and then sent back Peter Fulton. Jadeja made the difference in three of the four dismissals. He took a brilliant catch diving to his right at short mid-wicket to see the back of an in-form Kane Williamson (3) and a good throw from the deep saw skipper McCullum run-out for one. The mood in the Indian camp might be positive but they still have a long way to go to make a difference in this match.

It was a busy morning session and India might well be chasing a target by the end of the day if they manage to skittle out New Zealand to a low score. 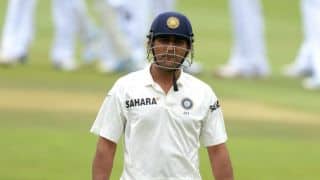 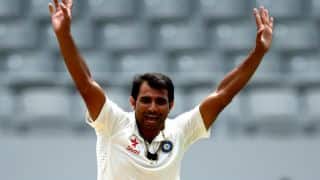