New Zealand vs Australia, 1st ODI: Marcus Stoinis disappointed after 6-run defeat despite his stunning per

After scoring an unbeaten 146 off 117 and picking up 3 for 49 against New Zealand, Australia all-rounder Marcus Stoinis expressed disappointment after his side lost by 6 runs in the first of the three-ODI series.

After scoring an unbeaten 146 off 117 and picking up 3 for 49 against New Zealand, Australia all-rounder Marcus Stoinis expressed disappointment after his side lost by 6 runs in the first of the three-ODI series. Stoinis picked up three crucial wickets of Martin Guptill, Kane Williamson and Colin Munro, restricting New Zealand’s run riot below 300. He then continued his stellar show, hitting as many as 11 sixes and 9 fours during his gem of an innings and taking Australia to the cusp of victory. From 67 for 6 at one stage, Australia managed 280 all-out, eventually losing the match. Regardless, Stoinis believes that a win is Australia as well as his No. 1 priority. FULL CRICKET SCORECARD: New Zealand vs Australia, 1st ODI at Auckland

“Something that you probably should enjoy but the win is the number one priority,” Stoinis told cricbuzz.com. “If you look at the stat book after making 140 odd and taking three-for, it doesn’t feel that good. It just shows how much of a team game cricket is and how important winning is to everyone. I’m happy to an extent but probably not what I would imagine. As an all-round game, it’s what you dream of and think about when you close your eyes before the game. I’ve had smoother innings than this, but this is a different kind of pressure. To put the performance on the board feels good.”

Luckily for Australia, the lower-order, including James Faulkner and Pat Cummins, stuck around with Stoinis and stitched together good partnerships. “When Jimmy [Faulkner] came out, personally I was thinking: okay, you’ve got to give yourself a chance here, so first thing’s first, have a look around, get yourself moving. Once he got to about 15 or so, we made a little plan there as to the way we’d go about it. When you come up with a plan, everything is more simple even though it seems a long way away. So it was all thought out, Stoinis said. READ: New Zealand vs Australia, 1st ODI: Marcus Stoinis achieves new high

[The plan was to] pace myself but then target a certain bowler if I felt that it was the end with the wind. Then there were a couple of overs before they put five out on the boundary, where I thought it might be time to have a crack. Also, once you’ve faced 100 balls, it does get a bit easier, so the more wickets we lost, the more I thought it was my turn to score the runs,” he added.

Stoinis also feels that he needs to improve his bowling to seal a place in the side as an all-rounder. “I think my bowling had to improve to move into that all-rounder’s position. In state cricket, I probably bat a bit higher, but it’s a different mould of position if you’re going to be batting at six, seven or whatever it is. Mostly just thinking about what’s happening in the situations you’re in and understanding the game,” he said. “On the bowling side of things, it’s just consistency really.” READ: Marcus Stoinis and his many records in during AUS vs NZ 1st ODI

Josh Hazlewood, the last man for Australia, did not get a chance to face a single ball in the 54-run partnership for the final wicket. “[Batting with Hazlewood] the plan was for me to face the first four or five and then get a single last ball. But at the end there, the plan was to try to hit a six and get a draw and then leave Josh to get a single to win the game.”

Stoinis also accepted that it felt nice to receive a standing ovation at the end after some hostile reception early on. “That [standing ovation at Eden Park] was really nice. Crowd was pretty hostile early on, and fielding on the boundary, got a few nice comments. Then someone said ‘he’s actually not a bad bloke.’ I laughed and carried on. To walk off at the end, to something like that, is something you remember forever.” READ: Marcus Stoinis, Auckland and Australianism

The Chappell-Hadlee trophy series resumes at Napier, where the second ODI will be played on February 2. 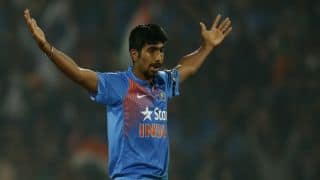