Bangladesh trail by 171, but Soumya and Mahmudullah have relished batting on a benign wicket.

Soumya Sarkar scored his maiden Test century as Bangladesh mounted a brave battle to keep the first Test against New Zealand alive on the fourth morning in Hamilton on Sunday. In partnership with skipper Mahmudullah the pair batted throughout the morning session to be 310 for four at lunch. (READ: 1st Test, Scorecard)

They are still trailing by 171 and the new ball is eight overs away, but Soumya and Mahmudullah have relished batting on a benign wicket.

The 26-year-old Soumya, whose previous Test best was 86 – also in New Zealand two years ago – plundered the boundaries as he raced to his century off 94 balls to equal the Bangladesh record for the fastest hundred set by Tamim Iqbal against England in 2010. He was unbeaten on 123 while Mahmudullah was more circumspect in his approach as he advanced from his overnight 15 to 65 with Bangladesh adding 136 in the session.

Their partnership is now worth 184 and the New Zealand players must be wondering if they are facing a repeat of the Sri Lankan Test before Christmas when Angelo Mathews and Kusal Mendis produced a (rain-assisted) match-saving 274-run stand in Wellington.

Soumya, in aggressive form, brought up his 50 with a six off Trent Boult, moved into the nineties with a huge six out of the ground off Todd Astle then reached his milestone century with a single off Tim Southee. He has faced 137 deliveries and cracked 16 fours and five sixes.

The New Zealand quicks short-ball attack proved expensive with 57 runs coming off the first 12 overs before Astle was brought into the game. But the legspinner’s 11 overs cost 50 runs without reward. 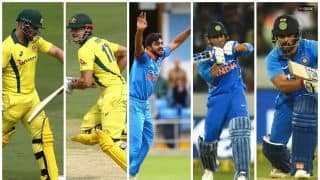 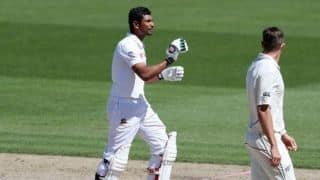