Bangladesh will play three ODIs and three Test matches in New Zealand between February 13 and March 20.

The Bangladesh Cricket Board (BCB) had suspended Sabbir for six months from international cricket in September for abusing a fan on social media.

But chief selector Minhajul Abedin said the BCB had informed them that Sabbir’s suspension would be lifted at the end of the month, making him eligible for the New Zealand ODI series. (ALSO READ: David Warner, Steve Smith controversially dismissed on Bangladesh Premier League debut)

“So, we had no problem in selecting him for the series,” Minhajul added.

“His name was strongly recommended by the skipper (Mashrafe Mortaza). Mashrafe wanted someone who could handle fast bowlers well in the lower order,” he said. (ALSO READ: Bangladesh’s ODI captain Mashrafe Mortaza now a Member of Parliament)

Sabbir last played for Bangladesh against West Indies in July and August and has struggled in domestic cricket while serving his international ban.

The 27-year showed signs of returning to form only last week when he struck 85 off 51 balls during a Bangladesh Premier League (BPL) Twenty20 match for the Sylhet Sixers.

Bangladesh selectors also rewarded pacer Taskin Ahmed for an impressive show in the BPL with recall to both the ODI and Test squads.

Bangladesh will play three ODIs and three Test matches in New Zealand between February 13 and March 20. 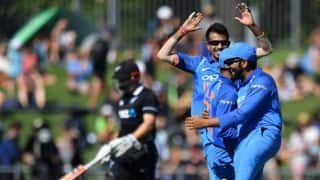