Becoming New Zealand‘s most successful wicketkeeper in Test cricket is an honour for BJ Watling, and one he happily credits his team-mates with.

After the win, Watling – who in 2012 switched from opening batsman to wicketkeeper – played down his milestone.

“You put that down to as many opportunities you get,” he told reporters at Seddon Park. “I’ve been lucky enough to keep to some of the greats – and [have had] plenty of opportunities to get dismissals. It’s been a bit of toil for the last six or seven years. [I’m] proud of the achievement, and hopefully there’s more to come.

“They [bowlers] create the chances and I’ve managed to keep to five or six of the best bowlers we’ve ever had. That’s a pleasure. There are definitely nerves throughout each and every game. Towards the end, you know you don’t want to put down a chance or make a mistake.”

South Africa-born Watling, 33, made his New Zealand debut as a wicketkeeper in a T20I in 2009 but did not get the job in Tests until 2013. He now stands as New Zealand’s most successful wicketkeeper with 202 dismissals. (READ: Boult swings New Zealand to thumping win)

Asked if there was any particular dismissal that stood out, Watling said he could’t name a favourite but did count a stumping of Shivnarine Chanderpaul as special.

“The first stumping was Chanderpaul. I do remember a lot of dismissals, but I like to look at how they sort of influence the series or the match,” he said. “We’ve managed to win a few great Test matches, and that’s all part of it.”

The second Test against Bangladesh is in Wellington from March 8. 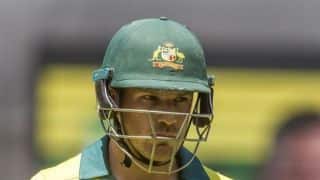