New Zealand on Sunday reached their highest ever Test ranking of No 2 in the latest ratings posted by the ICC.

New Zealand sit at second with 107 points, nine fewer than top-ranked India. At third are South Africa with 104 points.

In 2018, a terrific year in Tests was capped by Kane Williamson‘s team making history by winning four successive series for the first time in New Zealand’s history. This impressive run of form saw them beat England 1-0 at home, Pakistan 2-1 in the UAE and Sri Lanka 1-0 at home.

The win over Sri Lanka was New Zealand’s fourth Test series success in a row.

Of these wins, the highlight was beating Pakistan 2-1 for the country s first overseas Test series win against them in 49 years. Playing Tests after a seven-month gap, Williamson s team clinched a four-run thriller in Abu Dhabi their narrowest win of all time then lost in Dubai, before returning to Abu Dhabi where they triumphed by 123 runs.

In the latest individual Test rankings, Williamson remains second on the batting chart with 897 points behind Virat Kohli (922). Henry Nicholls jumped from ninth to joint fifth (763 points) with Joe Root.

Trent Boult is sixth in the Test bowling rankings (771 points), while Tim Southee is at ninth on 767. 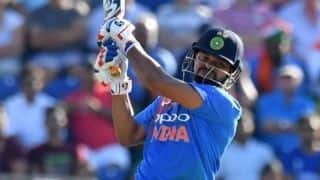