New Zealand captain Kane Williamson has named his playing XI for the first Test against Bangladesh that gets underway from Thursday in Hamilton.

New Zealand captain Kane Williamson has named his playing XI for the first Test against Bangladesh that gets underway from Thursday in Hamilton.

New Zealand, on expected lines, have made just one change from the playing XI that crushed Sri Lanka in by 423 runs in the Boxing Day Test. Todd Astle will add to his lone Test cap earned in 2017 replacing Ajaz Patel who was part of both Tests against Sri Lanka last year.

Trent Boult, Tim Southee and Neil Wagner are the lead seamers whole Astle slots in as the lone spinner. Colin de Grandhomme is the lone allrounder.

Bangladesh returned winless from their last tour of New Zealand after enduring clean sweep across formats. Their latest tour has also started on a losing note having suffered a 0-3 defeat in a three-match ODI series.

However, New Zealand know they cannot take Bangladesh lightly in the longest format as they have beaten the likes of South Africa, England and Sri Lanka at home.

“That series was a really good win for us, but we also saw in every game the quality that they do have. Without a doubt, that one-day series would’ve helped them coming into this Test series as well. We always have tough battles against Bangladesh. We know we’ll need to be playing our best cricket,” Williamson said on Wednesday.

New Zealand have also soared to the second spot in Test rankings but Williamson isn’t reading too much into it. “It’s something you don’t focus on. You’re just focusing on the cricket that you play. I guess if you can sit down at the end of the season and look back, then it might be something you look back fondly on. But there’s a lot of tough cricket between now and the end of the season,” he said. 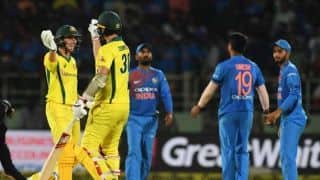