New Zealand were 38 for two, trailing Bangladesh by 173 at stumps on day three of the rain-shortened second Test in Wellington on Sunday. New Zealand openers Tom Latham and Jeet Raval went cheaply, leaving Kane Williamson and Ross Taylor to hold the fort until the return of rain brought an early end to the day less than 12 overs after tea. (READ: Wagner, Boult carve through Bangladesh)

Taylor, the only top-order New Zealand batsman to fail in the first Test, was in a particularly aggressive mood with boundaries off the first two balls he faced. By the time the players left the field he had 19 from 13 deliveries with Williamson on 10 from 17 as New Zealand set about reeling in Bangladesh’s 211. (READ: Tamim fifty gets Bangladesh going)

Tamim Iqbal gave the tourists a sound start with 74 before they wilted in the face of a barrage from New Zealand’s short-ball king Neil Wagner who took four for 28. Bangladesh, having reached 119 for one, saw the next nine wickets fall for just 92 runs. (READ: 2nd Test, Scorecard)

New Zealand, in reply, were two for eight before Williamson and Taylor began their rescue mission. After rain prevented any play on the first two days, the weather cleared enough to allow more than 72 overs on a green wicket on day three with 13 wickets falling before the rain returned.

No demons on green deck

It was more shot selection than the surface that accounted for the dismissals. Tamim showed there were no demons in a confident 75-run stand with Shadman Islam for the first wicket. It was their third consecutive fifty-plus partnership, the first time that feat had been achieved in New Zealand by an opening pair since South Africa’s Herschelle Gibbs and Gary Kirsten in 1999.

The pre-match talk had centered on the green wicket but the look proved deceptive as New Zealand’s new-ball pair Trent Boult and Tim Southee were unable to generate much swing or effective seam movement. Once they were out of the attack the wickets began to fall with Colin de Grandhomme accounting for Shadman for 27 before Wagner weaved his magic.

Unlike the first Test when the Bangladesh batsmen were troubled by the menacing height he extracted from the pitch, this time they were the architects of their own downfall. Wagner’s short balls were little more than waist height with the wickets coming from injudicious pull shots or inessential flicks down the left side.

In a productive 13 deliveries either side of lunch, Wagner removed Mominul Haque (15) and Mohammad Mithun (three) before the break and when play resumed he took the valuable wicket of Tamim who top-edged an attempted pull shot. He also accounted for Bangladesh captain Mahmudullah for 13.

Liton Das (33) arrested the slide in a 38-run seventh-wicket stand with Taijul Islam (eight) before Boult mopped up the tail with three wickets for four runs in nine balls. Wagner finished with four for 28 while Boult’s late burst gave him three for 38.

In New Zealand’s reply, Abu Jayed claimed both openers with Latham gone for four and Raval out for three. 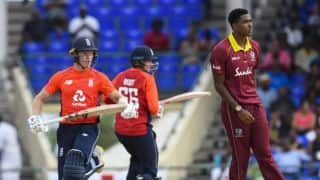