New Zealand and Bangladesh face off in the 37th match of the ICC Cricket World Cup 2015 Pool A match at Seddon Park in Hamilton on Thursday. Both teams have already qualified for the quarter-final, and would like to end their campaigns, which has been satisfactory for both teams so far, on a satisfactory note with a victory. LIVE SCORECARD: New Zealand vs Bangladesh, ICC Cricket World Cup 2015 Pool A match

New Zealand have been the best side in the tournament so far, without the slightest bit of doubt. They have overcome all sides, including co-hosts Australia. Aside from winning all of their games in the tournament so far, they have excelled in all of their departments. Their last win came against World Cup debutants Afghanistan, with the Black Caps sealing a place in the last eight with a six-wicket victory. ICC Cricket World Cup 2015: POINTS TABLE

Though the Brendon McCullum-led men will not take Bangladesh lightly, they will look to rest some of their key players for the inconsequential game. McCullum will look to rest at least one of the lethal pace trio of Tim Southee, Trent Boult and Adam Milne, in order to accommodate the untested Mitchell McClenaghan. Milne is likely to be rested as he has a bruised shoulder. It will be interesting to see whether New Zealand play Kane Williamson also, as he was down with stomach trouble.

Bangladesh, on the other hand, are in a euphoric state at the moment after their historic win against England at Adelaide, in which they registered a 15-run victory to knock the latter out of the tournament in the first round itself. Mashrafe Mortaza would like for his team to maintain the momentum during the final game of the league stage, though like the Kiwis, he might want to rest a couple of major players as well. READ: Bangladesh could start with spin to hamper Brendon McCullum

While New Zealand are the clear favourites for the match, Bangladesh will be inspired by their recent victories against the Kiwis in One-Day International (ODI) cricket, especially their 4-0 and 3-0 whitewashes of the Black Caps in two bilateral tournaments played in the recent past.

Chandika Haturusingha: Our boys never seem to get tired of training 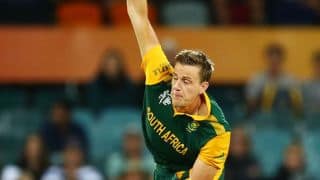