Day Three looks all about survival for Kane Williamson s team against a raging attack comprising of Kagiso Rabada, Morkel and Keshav Maharaj.

Day Two bore a similar scene for New Zealand as they gave away a vital lead to South Africa in the first innings of the second Test, being played at Wellington. Unable to cash in on their success in the first session, the Black Caps found themselves in a spot of bother by the end. South Africa took a higher ground thanks to a commendable show by Quinton de Kock and his alliances with Temba Bavuma, Vernon Philander and Morne Morkel. The visitors ended up taking an 81-run lead, having started the day with a 244-run deficit. The Day Three looks to be all about survival for Kane Williamson s team a raging attack comprising of Kagiso Rabada, Morkel and Keshav Maharaj. LIVE CRICKET SCORECARD, New Zealand vs South Africa, 2nd Test at Basin Reserve, Wellington

Day Three from New Zealand perspective- The batting line-up which is under pressure, led by Williamson, will need to pull up its socks if they have any chances of taking a 1-0 lead in the series. Williamson himself needs to deliver the goods after failing in the first innings. The opening stand between Jeet Raval and Tom Latham will be crucial to the home side s chances, as they will face a dangerous South African bowling attack with their tails up. Raval s dismissal in the first innings will be worrying as it had sparked a collapse.

The centurion from the first innings, Henry Nicholls, would want to keep the momentum going provide an anchor to his side. Much depends on the likes of Jimmy Neesham, Neil Broom and Colin de Grandhomme, who form an explosive lower-order. BJ Watling, as usual, will be expected to churn out yet another gritty innings.

New Zealand would know a lead over 200 will make it difficult for South Africa to chase, with rains being forecasted forSaturday. The surface is not spitting lizards (New Zealand is a snake-less country; lizard dominated ecology) yet but does seem to hide some trick under its green-looking strip.

Day Three, South Africa s perspective- South Africa will look to bank on their 81-run lead from Day Two with Philander and Morkel striking gold, late evening. The pair will look to add as many runs as possible in the first session, with a 100-run lead being their primary aim. The first session as this Test has proved that conditions will be helpful to swing bowling. Much will rely on Rabada, who has been a bit off-colour in the series; meanwhile, Philander s second innings record cannot be overlooked.

After his show in the first innings, Maharaj will be expected to run riot in the hosts batting line-up with the track showing signs of wear and tear. Uneven bounce late into Day Two must have had Maharaj planning out strategies, after his outing with the bat was a letdown. 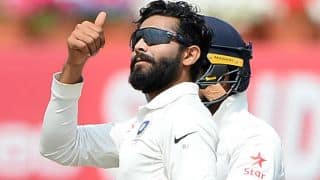