New Zealand score 36 for the loss of no wicket after five overs.

While chasing a target of 171 against South Africa in ICC World T20 2014 Group 1 game played at Chittagong, New Zealand started cautiously. Kane Williamson, known for playing with a fine technique, twinned with delightful strokes was the one to open up. He played a cheeky sweep shot off the off-spinner JP Duminy to essay a fine boundary.He continued to play cheeky shots to frustrate South African pacers. It was him making room and thwacking the tall hit the deck seamer, Morne Morkel over off-side that showcased he was about to change gears.

On the other end of the spectrum, Martin Guptill was more circumspect. The tall man struggled a bit against back of a length stuff from Lonwabo Tsotsobe. Dale Steyn too was getting it to in-slant, before shaping it away a wee bit from right-handed batsmen with the new ball.

Earlier, South Africa‘s Duminy, known for giving finishing touches to an innings with his pyrotechnics lifted the sagging spirits by taking them to 170 for the loss of six wickets. He essayed shots in a 360-degree arc to leave New Zealand bowlers clueless. It was left to Corey Anderson to take the key wicket of  Duminy’s partner and the dangerous, David Miller.  Duminy though continued to flay New Zealand seamers all over the park and help them reach a fine total. 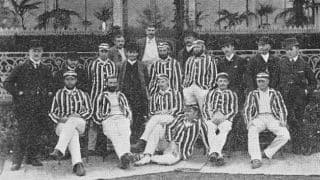