South Africa are 61 for three after 10 overs.

New Zealand continued to make inroads into South Africa‘s batting line-up in ICC World T20 2014 game played at Chittagong by taking the wicket of the key man, AB de Villiers. De Villiers was clean bowled by off-spinner, Nathan McCullum from around the wicket.

Earlier, New Zealand won the toss and elected to bowl. The steady seamer, Kyle Mills known for taking wickets in his first over opened the bowling for New Zealand. Both South African openers, Amla and Quinton de Kock were cautious while facing up to Mills, as he got a nice shape away from both the batsmen. Even the left-arm seamer Mitchell McClenaghan was getting a nice shape away from both of them.

It was the left-hander de Kock who finally tried to be aggressive. However, Amla was the one who found the boundary boards first with a fine pull shot on the backfoot. Actually, Amla survived a tough chance when Guptill dropped a tough chance off Mills’s bowling.  Mills though, took the wicket of de Kock by getting him caught behind the stumps. Faf du Plessis, the captain came into bat at No 3 and struggled for timing, before essaying fine shots. 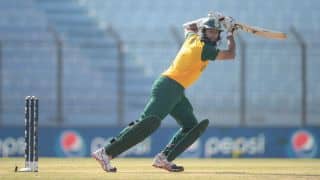