Kumar Sangakkara has reached his 21st in One-Day Internationals (ODI) half-century off 52 balls to propel Sri Lanka to a good position. Sangakkara came in in the 16th over after Sri Lanka had made a good start courtesy of a 70-run stand between Tillakaratne Dilshan and Lahiru Thirimanne. Thirimanne was out LBW to Corey Anderson off the last ball of the 15th over.

Sangakkara is well supported by Dilshan at the other end, who also reached his fifty earlier. Lahiru Thirimanne was dismissed for 30 earlier. Sangakkara has been great form in this series, which is a good sign for his team as the ICC World CUp 2015 is just around the corner. The orld Cup could be Sangakkara’s last tournament in ODIs

New Zealand lead the seven-match series 4-1 and Sri Lanka will look to win and save some pride. 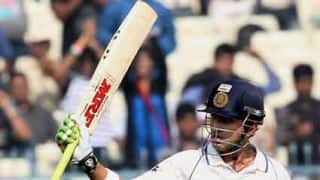 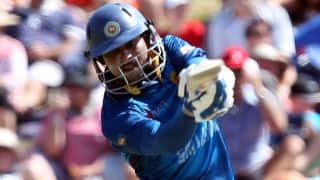