India skipper Mahendra Singh Dhoni took the result of the fourth One-day International against England, which ended in a tie on Sunday, in his stride. 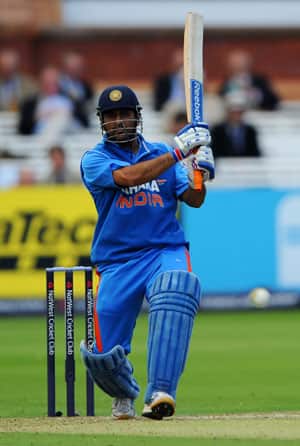 India skipper Mahendra Singh Dhoni took the result of the fourth One-day International against England, which ended in a tie on Sunday, in his stride.

Rain forced the match between the two sides to end in a dramatic tie under the Duckworth-Lewis method, allowing the hosts to clinch the five-match ODI series by taking an unassailable 2-0 lead, but Dhoni did not seem too upset.

“I will not crib about the tie. Today when the ball got wet, we had enough resources. We know (Suresh) Raina has fair amount of firepower and if he gets going, can destroy any attack in the world. We have not won anything. It has been a long tour, we have one more game, we will give it our best,” Dhoni said after the match.

As for Ravindra Jadeja, Dhoni said, “Jadeja is doing his job brilliantly. In conditions like these, it is hard for the part-timers.”

Jadeja conceded 60 runs for a wicket from nine overs and also made a wild overthrow in the 40th over of the innings, which helped England in scoring 15 scoring runs.

England captain Alastair Cook though the tie was a “fair” result.

“It was touch and go towards the end, we ended up batting for D/L, being more defensive knocking off the singles, not sure when the rain was coming. Tie was a fair result. Great to see (Ravi) Bopara delivering on the big stage to get us a tie,” Cook said.

Bopara scored 96 to bring England within sniffing distance of a victory, and Cook was, understandably, appreciative of his batsman’s effort.

“We tried everything earlier but that partnership (between Dhoni and Raina) was fantastic. If we had kept them to 250, we could have got there comfortably. Possibly we missed Dernbach. We will know on (Stuart) Broad in 48 hours,” Cook said.

Raina, who struck a blazing 84 off 75 balls, said, the plan was to hit the balls in his zone.

“I was batting well but not getting big scores. My game plan is simple, when I get the ball in my areas, I play my game. Disappointing for Ravi to not have got the 100,” Raina said.

More than missing out on a well-deserved century, Bopara was disappointed with the way his side had to clinch the series.

“Not an ideal way to clinch the series, with the rain around, we did not know when to accelerate. Should I knock it for ones and twos, or go for the big shots, once (Graeme) Swann got out I thought we should really go for it towards the close. (The) last couple of games have been nice for me, (but still a) long way to go ahead,” Bopara said. (PTI)