Well, as expected, there were some surprise elements in Clarke's squad for India and the biggest was the exclusion of Indian opener Shikhar Dhawan and all-rounder Hardik Pandya.

The eighth edition of ICC Champions Trophy is nearing and ahead of this mega event, former Australian captain Michael Clarke revealed his squad for India for the tournament. India enter the tournament as the defending champions. England will be hosting the event for the record third time. Well, as expected, there were some surprise elements in Clarke’s squad for India and the biggest was the exclusion of Indian opener Shikhar Dhawan and all-rounder Hardik Pandya.

Speaking to India Today, Clarke revealed his squad by saying, “I think if KL Rahul is not completely fit, India will not pick him. It is a big loss but India have got replacements. I think Rohit Sharma needs to play and open for India. And then I think the selectors will go for Ajinkya Rahane. Rahane s technique if the ball is swinging is conducive to England, he is a good player of both fast and spin and offers a lot on the field.”

In the middle order, it is quite similar to India’s previous ODI series against England. No brainer at No.3 Virat Kohli as captain, Yuvraj Singh at No.4. I think Yuvraj has earned his place, he is experienced. I would go with MS Dhoni at No.5. He is experienced and he s still the best keeper in the Indian team. At No.6, I would pick Manish Pandey and then Kedar Jadhav at No.7, Clarke added.

Like middle order, the bowling line-up is quite same but the pace bowling all-rounder Pandya misses out. “Ashwin and Jadeja will be my two spinners and my four quicks would be Bhuvneshwar Kumar, who continues to show that he can play in all three formats. Then it s Umesh Yadav, Jasprit Bumrah and Mohammed Shami, Clarke said.

The ICC Champions Trophy 2017 will start from June 1 at The Oval. India are placed in Group B and will face Pakistan, Sri Lanka and South Africa in the group games. 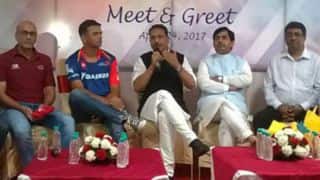