Ngidi played just the two opening games before sustaining a left hamstring injury in a match against Bangladesh.

South Africa pacer Lungi Ngidi has confirmed he is “100 per cent fit” to take the field in their World Cup match against New Zealand here on Wednesday.

South Africa’s start to their World Cup campaign has been far from ideal, having lost three opening games and a wash-out tie, with a slew of injuries hampering their progress.

Ngidi played just the two opening games before sustaining a left hamstring injury in a match against Bangladesh.

“It’s been tough. Injuries are never nice, but with the support staff that I’ve had around me it’s been pretty good and I’ve been alright,” Ngidi was quoted as saying by the official website of the Cricket World Cup.

“It’s just been frustrating not being able to play.

South Africa had been forced to field a depleted pace attack with legendary fast bowler Dale Steyn ruled out of the entire tournament, while Ngidi sat out of three matches.

The 23-year-old pacer’s return is expected to bolster South Africa, who have only an outside chance now of making it to the semi-finals after three loses from five games.

In their last match, South Africa finally managed to get a win under their belt after beating Afghanistan and now they would need to win the rest of the league stage matches in order to make the last four, and Ngidi feels New Zealand do have some weaknesses that could be exploited.

“I don’t think their middle and lower order have been tested enough. They have got most of their runs at the top of the order, so if we can get one or two maybe we can test them. I think then you could be looking at a different situation with their batting,” said Ngidi. 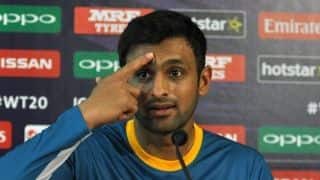