James Anderson, born in the Lancashire town of Burnley has spent his entire career with the county playing at Manchester.

England great James Anderson insisted he wanted to win the Ashes again after an end at his Old Trafford home ground was renamed in his honour. The Pavilion End at Lancashire’s Manchester headquarters will now be known officially as The James Anderson End in recognition of England’s all-time leading Test wicket-taker’s “immense contribution” to both club and country in the 15 years since his first-class debut. The swing specialist could bowl from The James Anderson End as soon as Friday, when the fourth Test between England and South Africa is scheduled to start at Old Trafford.

While Sachin Tendulkar won a 2011 World Cup final with India on a Wankhede ground in Mumbai where a stand was named after him, this is a rare recognition for a still active cricketer in the English game. Indeed Old Trafford’s Brian Statham End was only so named several years after the Lancashire and England pace bowling great, a star of the 1950s and 1960s, had died.

For Anderson, born in the Lancashire town of Burnley and someone who has spent his entire career with the county, it was a shock late 35th birthday present.

“I’m blown away, really, by the gesture from the club,” he told reporters at Old Trafford on Thursday. “I can’t quite believe it has happened. It is something that usually happens when people have stopped playing or are further down the line. So to have this happen when I’m still playing and potentially bowling from that end in the game, is a bit surreal.”

But he insisted this honour should not be taken as a sign his career was winding down. “I don’t like looking back on my career too much because I am still playing and I still have things I want to achieve, personally and with this team,” he said. And for Anderson, who took 24 wickets during England’s 2010/11 Test series victory in Australia, one of those targets is another Ashes triumph ‘Down Under’ when the side travel to their arch-rivals later this year.

“I’d like to win the Ashes again,” he said. “I think this team can achieve great things in the next couple of years and I’d like to be around to be a part of it and help the team improve.

“For me, that’s what keeps me going and keeps me hungry to keep playing the game.” He added: “I’ve felt really good in this series. Barring me slipping in the shower or a back spasm overnight, I’ll have played all four games. I’ve had a couple of injuries over the last 12-18 months so staying fit is a priority.”

Meanwhile novice England captain Joe Root said of Anderson: “He is as good as ever. “To have someone like that to go to when you are under the pump, when you want someone to change the game, is invaluable,” explained Root, who added it was “great to hear” the overnight announcement that a contract row between Cricket Australia and their players, which threatened the Ashes, had been resolved.

Anderson’s 480 wickets put him sixth in the list of Test cricket’s leading wicket-takers, with all the bowlers above him retired. Yet for all his success elsewhere, Anderson has still to take five wickets in a Test innings at Old Trafford. “It’s not always been a great ground for me with England but it would be nice if I can get on that (honours) board,” said Anderson, who has 22 five-wicket hauls in 125 Tests to his credit.

“But we have a series to win and we’re in a great place,” added Anderson, with England 2-1 up with one to play against South Africa.

Meanwhile Anderson, asked if ‘his’ end — which used to be square on before the pitch was turned through 90 degrees several years ago — was his favourite at Old Trafford, replied: “It is now.” 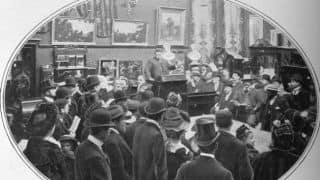