With the World Cup approaching, Ireland will be keen to spoil Eoin Morgan-led England's party in Dublin.

England have turned their fortunes since the last World Cup. They did away with the old-fashioned approach and replaced it with attacking the opposition all through the fifty overs. And with the World Cup 2019 around the corner, England will take on Ireland in a one-off ODI at the The Village, Malahide in Dublin on Friday.

While Jofra Archer and Ben Foakes are in line for their England ODI debuts, England will be without the services of Alex Hales, who was dropped from England s squad for the England ODI and the World Cup after he reportedly failed a second test for recreational drugs. With Hales out and Jason Roy not part of the squad due to injury and Jonny Bairstow not around for the Ireland series, it is a chance for James Vince and Joe Denly at the top to shine.

Coming to Ireland, they will be eager to spoil Eoin Morgan and Co. s party. The likes of Tim Murtagh, Boyd Rankin and George Dockrell will hold the key for Ireland as they look to make the most of England s new-looking top order.

While Gary Wilson s return to the Ireland squad shall be of some help, England will be without the services of the experienced duo of Ed Joyce and Niall O’Brien, who recently announced their retirements.

With this background, William Porterfield s recent patchy form is an area of concern. The Ireland skipper failed to score big during their series against Afghanistan in India. Hence, Kevin O Brien will hold the key as Ireland seek an England upset.

What: Ireland vs England, one-off ODI

Where: The Village, Malahide, Dublin

The trio of Tim Murtagh, Boyd Rankin and left-arm spinner George Dockrell will be taking care of most of the bowling responsibilities. Ireland, meanwhile, may hand Lorcan Tucker his debut.

With Moeen Ali rested, England may field just one spinner Adil Rashid in the playing XI. With Bairstow, Jos Buttler and Ben Stokes rested, this will be a chance for Foakes, Archer and others to make their presence count. 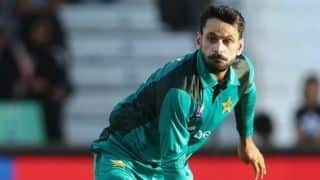