The CoA headed by Vinod Rai, met the representatives of various state associations at the BCCI headquarters in South Mumbai in batches.

Mumbai: Continuing their opposition to some of the Lodha Committee reforms, the BCCI state associations on Sunday told the Committee of Administrators that one-state- one-vote was the major point of contention among the three recommendations they are opposed to. The CoA headed by Vinod Rai, met the representatives of various state associations at the BCCI headquarters in South Mumbai in batches. “Two, three reservations were discussed. One state-one vote, selection committee and cooling off period of nine years. Age tenure is not that much a major issue,” a source said. N Srinivasan attends BCCI SGM

Ousted BCCI president N Srinivasan attended the meeting as a representative of the Tamil Nadu Cricket Association. According to sources, Srinivasan did not raise the issue of ICC’s new revenue share model but is most likely to speak about it during Special General Meeting tomorrow. Meanwhile, acting BCCI Secretary Amitabh Choudhary refused comment on appointment of the new coach, saying a Committee was there to look into it. Asked if the captain will be consulted, Choudhary said, “That’s for the committee to decide”.

Former India skipper and Cricket Association of Bengal President Sourav Ganguly, who is part of Cricket Advisory Commitee (CAC) also refused comment on the issue. “I have got nothing to say, it depends on directions. I understand you want all these things from me but at this point it is difficult for me to answer,” said Ganguly.

Asked kind of coach you want, pat came the reply, “the one who can win matches”. It is also reliably learnt that former skipper Rahul Dravid is expected to visit the BCCI HQ tomorrow.

But when asked about it to Ganguly, he said he was not aware about any such development. 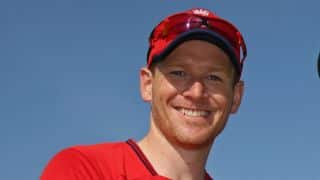