South African all-rounder Albie Morkel feels the pitches at Paarl and Kimberly, which are slow and turning, could benefit the Sri Lankan team. 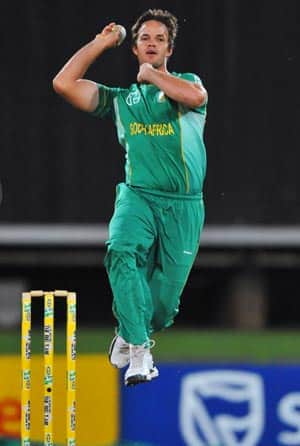 Albie Morkel is back in the South African side, replacing Dean Elgar for the ODI against Sri Lanka Getty Images

South African all-rounder Albie Morkel feels the pitches at Paarl and Kimberly, which are slow and turning, could benefit the Sri Lankan team.

Back in the team, replacing an injured Dean Elgar, Morkel suggests the squad is much better now with the inclusion of Latish “Slinga” Malinga.

“I m back in the SA side because of an injury to Dean Elgar but I ve worked hard for it. I ve scored the runs and taken the wickets for the Titans at the right time, so I m happy to be back and hope I can make a contribution.

Malinga is a handful with the new ball and the older ball but, playing off two new balls, it will be interesting to see how he changes his style of play because he was very dangerous when the ball was reversing,” Morkel was quoted in Sports24.

Morkel feels he has matured over the years.

“I m the same guy but with a better mental attitude,” said Morkel.

“I ve gone back and forth for various reasons, through injury and lack of form but my mental attitude is the most important thing.”

Morkel has been out of the team with injuries. Few months ago, he underwent an appendix operation.

The South African one day international (ODI) squad had gathered on Monday in Mother City, to prepare for the first ODI. The first ODI between the teams is on Wednesday.

“South Africa have played some good cricket too, so hopefully the series will be full of runs and full of highlights. AB [de Villiers] will do a great job as the new captain – he s on top of his own game so he can lead from the front,” said a confident Morkel.

“I m looking forward to see how he develops as a captain. Graeme [Smith] did a fantastic job and he and Jacques are still there so I m sure they ll help AB a lot. I think he s the right man for the job.”

Morkel said the team is ready for the battle.

“The team is hungry to perform, and hungry to put the Sri Lankans away.”