Pakistan cricket authorities and former players have backed Wahab Riaz's selection in the side for the upcoming series against England and termed British media's criticism of paceman's inclusion as "unfair". 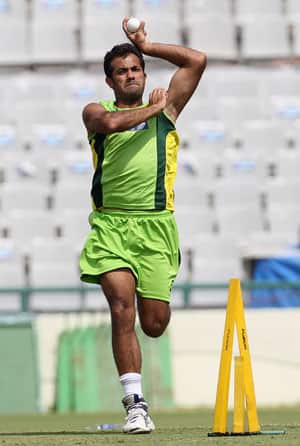 Pakistan cricket authorities and former players have backed Wahab Riaz’s selection in the side for the upcoming series against England and termed British media’s criticism of paceman’s inclusion as “unfair”.

A section of the British media has described as negative the Pakistan Board’s decision to select Riaz, whose name figured the spot-fixing scandal.

“We know there is history between the two teams after last year’s spot-fixing scandal in England and subsequent events. But we just want to focus on cricket and on keeping the series free of controversies and issues,” Pakistan coach Mohsin Khan said.

Riaz was overlooked for the one-day series against Sri Lanka and the tour to Bangladesh after his name was mentioned during the spot-fixing trial but he has been recalled for the England series.

Mohsin said PCB has its own system of scrutinising and clearing players and it was only after they gave a green signal to the selectors that Riaz was considered for selection.

“As far as I am concerned once a player is made eligible for selection by the board, he is like any other member of the team. And he is in the side because of his ability to reverse swing the old ball which will be a big asset for us on the pitches in Dubai and Abu Dhabi,” Mohsin said.

The English press has also warned of bad blood between the two teams because of Riaz’s selection, recalling his clash with England batsman Jonathan Trott last year during the fourth Test at the Oval.

However Mohsin said he did not expect such a situation. “All that is now history. We are moving ahead. I think a strong match referee and the umpires will have important roles to play in the coming series. I am just happy that we have the Umpires Decision Review system for the entire series,” he said.

Pakistan’s former captain Rashid Latif and ex-chief selector Iqbal Qasim also felt that the Pakistan team should not come under pressure because of the negative campaign launched by British media.

“Wahab is a strong character and should be prepared for some harsh words. But as far as I am concerned it is unfair to pass judgements on any player once he is selected by his Board,” Latif said.

Latif said historically there had always been controversies and issues when Pakistan played England and this time the British media was out to make Riaz the scapegoat.

“They are launching an unfair campaign against him because as far as I know our Board has done the most to keep the game free of corruption.”

Qasim said that he believed that no player should be branded unless proven guilty.

“There is nothing to stop Wahab from playing for Pakistan. I see all these negative comments as a ploy to disturb our team which is doing very well and is perfectly capable of upsetting the world’s number one Test side,” he said. (PTI)

Phil Hughes punched in a scuffle at a Melbourne hotel