Pakistan will look to win the two-match Twenty20 series against South Africa starting on Wednesday to go to the top of the rankings in the shortest format of the game. 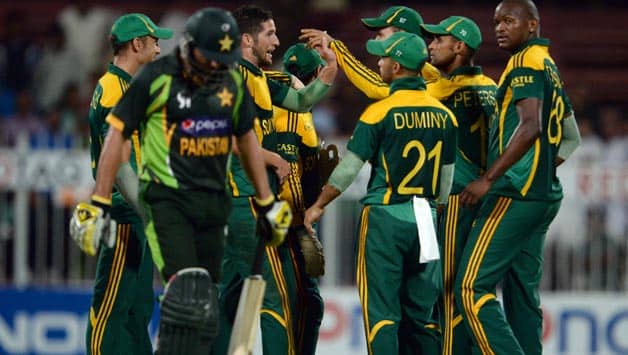 Pakistan will look to win the two-match Twenty20 series against South Africa starting on Wednesday to go to the top of the rankings in the shortest format of the game.

Besides improvement in the rankings, both the teams will also seek to get tuned up for the fifth edition of the World Twenty20 to be held in Bangladesh in March and April next year.

“Of course it will be a big thing if we attain the No 1 ranking, but for us it is more important to win Wednesday’s game and then think for the second,” said Hafeez at the launch of the Twenty20 Cup.

Both matches will be played in Dubai, with the second clash taking place on Friday.

“This series is also important for the fact that we have the World Twenty20 in four months so we have discussed it and want to have the same group of players so that we have a settled squad for the mega event,” said Hafeez.

Pakistan will also look to put behind them the 4-1 thrashing in the five-match one-day series which finished on Monday, and Hafeez said it will be important to forget that loss.

“We are disappointed at the one-day series loss but we have to put that behind us, it’s a new format and some new players have boosted our strength so we will definitely get better results,” said the 33-year-old.

Pakistan are bolstered by the return of all-rounders Abdul Razzaq and Shoaib Malik, while South Africa welcome T20 specialists in Henry Davids, Aaron Phangiso and David Wiese as well as pace spearhead Dale Steyn, who has not played a T20 since December last year.

“I think it’s nice to go into the series with a momentum and the confidence is there although it’s a different format and slightly different team but we look forward to it,” said du Plessis, who also sought to underline the importance of gearing up for the World T20.

“We must find the right balance with the World Twenty20 in the sub-continent, which will have similar conditions to here,” said du Plessis.

Sachin Tendulkar's 200th Test: Surrounded by quality players, the Little Master will be in great position to absorb more pressure

Shivnarine Chanderapaul: The sociological reason for his 'selfishness’