In the final session of the game, Pakistan need 69 to win and they have 5 wickets in hand with skipper Sarfraz Ahmed and Haris Sohail at the crease.

Can Pakistan start their post Misbah-ul-Haq, Younis Khan-era with a win? Will Sri Lankan cricket see a massive turnaround? In what seemed like lifeless Test at Abu Dhabi for the first three days has now transformed into a nail biter. It has all come down to the final session. Pakistan needed 136 when the post lunch session started and have now reduced to 67 for 5.

In the final session of the game, Pakistan need 69 to win and have skipper Sarfraz Ahmed and Haris Sohail at the crease. The day belonged to the spin wizards of the respective sides: Yasir Shah and Rangana Herath. While Yasir followed up his feat of second fastest (alongside Waqar Younis) to 150 wickets with a five-for in the first session, Herath followed his five-for by sending back Sami Aslam and Asad Shafiq. Worse, he didn t give any breathing space to the Pakistani batters and choked them of runs. ALSO READ: Yasir takes 5, PAK need 136 in 2 sessions to win 1st Test against SL

Pakistan were reduced to 16 for 3. Herath struck first, sending back Sami and Suranga Lakmal, who played a decent role as the nightwatchman had Azhar Ali back for nought. Dilruwan Perera soon dismissed Shan Masood bat-pad.

Expect a lot of fielders hovering in the catch regions in the final session but the key is also the need to contain runs. Sarfraz and Sohail have added 31 for the sixth wicket. Sri Lanka know what Sarfraz can do. It was the Pakistan skipper who bailed his side out from a similar situation against Sri Lanka to knock them out of ICC Champions Trophy earlier this year.

It all looked fine for Pakistan in the first session when they bundled Sri Lanka out for 138. If they manage to see through the final session, a win is a likely result. Gear up for the nail biter. 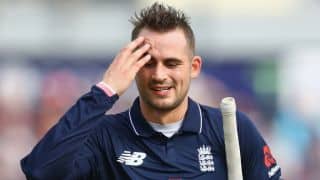