Prasad claimed two wickets and Herath one as Sri Lanka reduced Pakistan to 59 for three.

Dhammika Prasad claimed two wickets and Rangana Herath one as Sri Lanka reduced Pakistan to 59 for three at lunch on the opening day of their first Test match at Galle on Wednesday. Pakistan, back to the cricket field after a long gap of about six months, looked completely rusty in the first session as barring Azhar Ali, the other batsmen struggled against an inspired Sri Lankan attack.

Pakistan made a poor start to the match as Ahmed Shehzad chopped one into his wickets in the second over of the day, as Prasad provided Sri Lanka some early momentum with the first wicket. Shehzad was disappointed with the manner he got out, as the ball was way outside the off-stump and the stroke that he offered was needless.

Azhar Ali walked into bat after Shehzad’s dismissal and started off on a positive note with two boundaries off Prasad in the fourth over of the game. The right-handed batsman looked positive right from the beginning as the movement of the new ball did not trouble him as much as it did to his teammates. Ali played few spectacular strokes on the off side to indicate that he could be the man in form for Pakistan.

However, Prasad got another wicket when he trapped Khurram Manzoor in front of the wickets for three, reducing Pakistan to 19 for two after six overs.

Younis Khan and Azhar then joined forces to take Pakistan ahead, and the two batted with extreme caution against the Sri Lankans. Both Younis and Azhar were quick in running between the wickets, which was another plus point for Pakistan in the first session.

Just when Pakistan looked set to make a comeback, Herath struck to remove Azhar. Coming from over-the-wicket, Herath pitched one in line of the off-stump which did not turn much, and Azhar was cleaned up. There was another scare for Pakistan close to lunch, when Younis was declared out by umpire. Prasad bowled one that came in sharply, hitting Younis on the top of the back foot. The Pakistan batsmen reviewed the decision, which went in his favour. 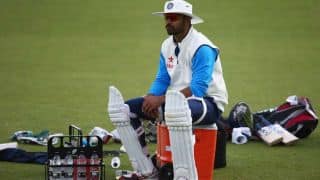