Pakistan might have been beaten across formats on their tour of South Africa but coach Mickey Arthur feels the team has learnt quite a bit and return home with valuable knowledge and confidence.

Pakistan were clean swept in the three-match Test series 0-3. However, they gave a better account of themselves in the ODIs where they lost 1-2 before the hosts sealed their dominance winning the first two match of a three-T20I series.

“We have been on the road for four-and-half months at hotels if you factor in that we played against Australia and New Zealand in the United Arab Emirates (UAE). I genuinely believe that we are a better team than we were before arriving in South Africa last year,” Arthur said after Pakistan secured a consolation win in the third T20I on Wednesday.

Arthur said Pakistan have taken another step towards their World Cup preparations by testing themselves on spicy South African pitches. “We are a better team for our World Cup preparations and playing in foreign conditions and I am proud with the way the guys have stuck to their guns. We gained valuable knowledge and confidence on playing against the frightening South African fast bowling attack,” he said.

He continued, “Throughout the South African tour we have seen how guys have grown because this is a tough place to tour and no Asian team comes here and win. For us to have competed throughout the series was pleasing. The boys never got to the point where they had one foot on the plane back home. Our last training session was as intense as the first training session we had when we arrived in the country.”

Arthur praised South Africa for how they dealt with pressure situations and is impressed with their current crop of cricketers. “Full marks to South Africa because they played the crunch moments well during the tour. I have been very impressed with this South African team in all the formats. They have lots of talent and they unleashed more young players in this T20 series and guys keep on stepping to the plate. I think they are in a good position,” he said. 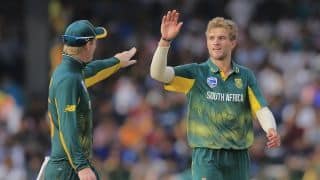