Pakistan played smart cricket as they pulled off a thriller to beat Sri Lanka by two wickets with a ball to spare in the second T20I.

Pakistan played smart cricket, as they pulled off a thriller to beat Sri Lanka by two wickets in the second T20I of the three-match series at Sheikh Zayed Stadium in Abu Dhabi on Friday. Although there were not as such any big scorers for Pakistan in the game, it was an all-round contribution from the side. Pakistan now have an unassailable 2-0 lead in the series, with a game in hand to be played on Sunday at the Gaddafi Stadium in Lahore. Meanwhile, Shadab Khan was adjudged Player of the Match for his match-winning performance towards the end. FULL CRICKET SCORECARD: Pakistan vs Sri Lanka 2017-18, 2nd T20I at Abu Dhabi

Earlier, Pakistan skipper Sarfraz Ahmed had won the toss and invited Sri Lanka to bat first. The visitors finished on a paltry total of 124 for the loss of nine wickets. Danushka Gunathilaka’s 51 and Sadeera Samarawickrama’s 32 were the highlights of their innings.

In addition, Farhim Ashraf became the first Pakistani to take a hat-trick in T20Is. He was also the highest wicket-taker for the side with figures of 3 for 16. Nevertheless, despite the total being slim, it turned out to be a challenging match as the Lankan bowlers gave a tough time to the Pakistan batsmen.

The Pakistan openers in the form of Ahmed Shehzad and Fakhar Zaman put up a steady stand of 30 runs, before Zaman departed for 11 in the fourth over. He was soon followed by Babar Azam the very next over for a mere single. There were hardly any partnerships thereafter, until the pair of Mohammad Hafeez and Sarfraz: they contributed a 39-run stand for the fifth wicket.

It was in the 16th over when Hafeez departed for mere 14 to Sachith Pathirana. Following his dismissal, there were again hardly any partnerships. However, the batsmen did manage to maintain the run rate as the game edged towards its end. The pair of Shadab and Hasan Ali took charge to finish off the innings.

With 11 needed off the final five deliveries, Shadab and Hasan played brilliant cricket. The third ball of the over saw Hasan being dropped at deep extra-cover boundary, and it resulted in three runs. However, it was the six off Vikum Sanjaya, which Shadab hit off the fourth ball. It drastically brought the equation down to two off two, as the pair took the winning runs off the very next ball, to register a thrilling two-wicket win, with a ball to spare. 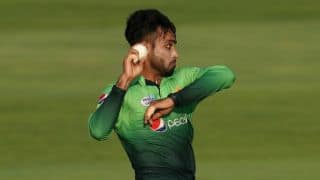 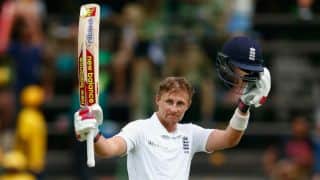