The 31-year-old also stressed that there was no rivalry between the fast bowlers in the team.

Australia fast bowler Nathan Coulter-Nile has said that in order to get picked for the 2019 ICC Cricket World Cup squad, one has to perform rather than worrying about the selection.

Coulter-Nile will have a chance to do that when the first of the five one-day internationals against Pakistan begins in Sharjah on Friday, according to the International Cricket Council’s (ICC) website. (ALSO READ: Coulter-Nile determined to push vertigo issue behind for a spot in the World Cup squad)

“The World Cup is always going to be spoken about. It’s around the corner and people are vying for selection. Practically speaking, to get picked, you have to perform. So that’s the easy way to do — go out and perform. You don’t need to worry about getting picked if you’re taking wickets,” Coulter-Nile said on Wednesday.

The 31-year-old also stressed that there was no rivalry between the fast bowlers in the team. “Everyone’s performing, that’s why we’re winning. But even when someone has a bad day, they’re really supportive of the other blokes who have had a good day,” he said. (ALSO READ: Aaron Finch ready to give up opening slot at World Cup)

“It’s fantastic to see. I don’t think it’s a conscious effort that anyone makes. It’s like good mates supporting each other. I don’t think anybody goes out there thinking, I’m not going to worry about selection’. It’s just the way everyone is, they’re all just good people,” he added. 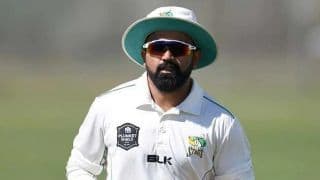