Pakistan lead by 431 against New Zealand in the 1st Test.

Pakistan were 127 for one  against New Zealand at the end of the first session on Day 4 of the opening Test at Abu Dhabi on Wednesday.  Mohammad Hafeez and Younis Khan are at the crease. Hafeez is 72  and Younis on 26.

Pakistan lead by 431 runs and would be looking to declare shortly after lunch. Pakistan were 15 for no loss overnight with Azhar Ali and Hafeez at the crease on 9 and 5 respectively.

Azhar Ali was the only batsmen to fall. He was out leg-before for 23 to the leg-spinner Ish Sodhi. Azhar’s dismissal brought in the in-form Younis Khan who has made a century in this Test match already. Younis has made four hundreds in the last three Tests matches.

Hafeez brought up his 11th Test half-century. It’s been a fluent knock so far. He’s stroked the ball beautifully. To add to this he’s been very positive throughout the first session, whenever the bad ball came his way he put it away.  Hafeez would be looking to convert this into a hundred. In the first innings he fell four short of well-deserved ton.

The all-rounder employed the drive and the cut a fair bit. It also points to the fact  that he was given room at times. One particular shot of his was a beautiful cover drive of Boult.  Hafeez was often given room throughout the morning session. Both Tim Southee and Trent Boult were guilty of this.

The left-arm seamer  Boult started off proceedings for the New Zealanders. He bowled a consistent line and length although he occasionally gave some width outside the off-stump which Hafeez cashed in on.

New Zealand who have a mountain to climb did try their best to contain the Pakistani line-up. For them though they have to find a way to save this Test match. They’ll need to show a lot of determination to do so. 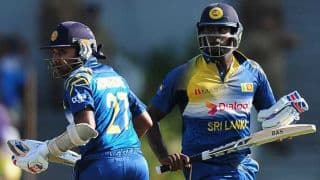 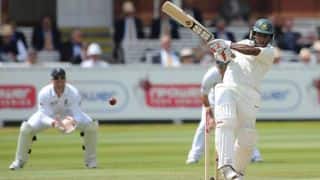