At the age of 34, Somerville played a starring role with seven wickets as New Zealand thumped Pakistan.

After watching from the sidelines as his team-mate Ajaz Patel pipped him to a Test debut in the series opener against Pakistan in Abu Dhabi, where the 30-year-old left-arm spinner bowled New Zealand to an epic four-run win, Will Somerville on Friday got the opportunity to cherish the feeling of having contributed to a famous victory in his first match.

Somerville, at the age of 34, was handed a Test debut in the deciding match of the series and played a starring role with seven wickets as New Zealand thumped Pakistan by 123 runs in Abu Dhabi for their first away Test series win over Pakistan in 49 years.

In his first international innings, Somerville made 12 off 99 balls in a dogged lower-order effort to help BJ Watling get the total past 250. He then captured figures of 36-8-75-4 with his offspin, followed by four off 34 balls in New Zealand s second innings at the Sheikh Zayed Stadium.

On Friday, the last day of the Abu Dhabi Test, the tall offspinner snared three wickets and was on a hat-trick after dismissing Haris Sohail and Asad Shafiq in successive deliveries. He was denied a fourth when Ross Taylor dropped a catch at slip moments before the win was completed, but Somerville – who was a late addition to New Zealand s squad after Todd Astle was ruled out with injury -had no regrets as he reflected on five amazing days as an international cricketer.

“I was extremely emotional coming off the field,” Somerville told Blackcaps TV. “It was nice to contributing with bat and ball, it’s just amazing. It still feels like a dream, I’m still pinching myself. Incredibly proud to have won for the Black Caps, we’re a very happy dressing room obviously.”

Wellington-born Somerville moved to Sydney with this family at the age of nine and first played first-class cricket at 30. Four years later, he was handed a fairytale Test debut.

“I felt really ready to play, you never expect to do what I did though, he said. It’s a buzzy feeling when that dream becomes a reality, it’s amazing.” 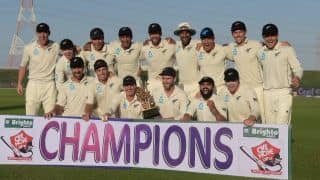 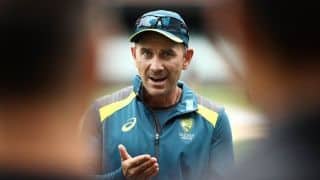