Yasir Shah drew level with Imran Khan for most wickets by a Pakistan bowler in a Test as New Zealand were beaten by an innings.

The legspin of Yasir Shah has consigned New Zealand to an innings-and-16-run loss on day four of the second Test in Dubai, thus sensationally levelling the series for hosts Pakistan with a match to go.

Having taken 8/41 as New Zealand were skittled for 90 on day three, and then added two more before stumps to become the first bowler since Anil Kumble in 1999 to claim 10 in a day, Yasir added six more on Tuesday to finish with 14 wickets in the Test – drawing level with Imran Khan for the most by a Pakistan bowler.

New Zealand began day four on 131/2 after the follow-on was enforced, and Ross Taylor continued to bat aggressively as he reached his fifty with a boundary first ball. He lost Tom Latham (50) not long after when Hasan Ali found faint edge, and then the offspinner Bilal Asif had Taylor s number on 82 when the batsman mistimed a sweep and for Yasir to take the catch at deep backward square leg.

Henry Nicholls and BJ Watling forged a stand worth 57 in 24.1 overs until Yasir trapped the latter lbw for 27 for his 11th wicket of the match. A loose swat from Colin de Grandhomme saw Hasan get another, and when Ish Sodhi recklessly exposed his stumps while attempting a paddle sweep off Yasir, it made the legspinner the sixth Pakistan bowler to claim 12 wickets in a Test after Fazal Mahmood, Imran Khan, Abdul Qadir, Waqar Younis and Danish Kaneria.

Nicholls resistance was finally broken on 77 courtesy a very good delivery from Hasan in the second over of a new spell, the delivery hitting a length and curving in to sneak past the bat and hit off stump. The left-handed Nicholls batted 187 balls for 77, with featured seven fours and a six.

Yasir’s fifth of the innings came in the form of Neil Wagner, who shaped to sweep aerially and got a top edge towards long-on where Hasan held a good running catch. Moments later he wrapped up the Test by having Trent Boult caught behind for 0.

This gave him match figures of 14/184 to sit behind the 14/116 that Imran claimed against Sri Lanka in Lahore in 1982. Yasir and Imran are the only Pakistan bowler with 14 wickets in a Test.

Yasir s 8/41 on Tuesday are the second best figures by a Pakistan spinner in Tests, behind the 9/56 that fellow legspinner Qadir took against England in 1987. 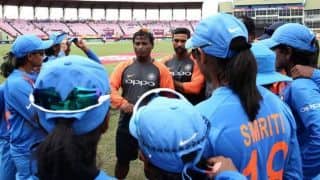 READ: Mithali Raj’s full letter to BCCI - I couldn't control my tears having given it my all for 20 years