Aamer missed the Test series against Sri Lanka due to a shin injury.

International cricket is set to return to Pakistan, with the hosts taking on Sri Lanka in the third and final T20I at Lahore. Pakistan leading the three-match series 2-0, will like to complete a series whitewash in front of their home crowd.

Amidst all the jubilation, Pakistan side were treated with some bad news. Usman Shinwari, star of the fifth One-Day International at Sharjah, is likely to be miss the final T20I, said a source according to a news published in Geo.tv.

Shinwari, who missed the second innings of the second T20I due to a side-strain after bowling just 2-overs, is likely to be replaced by Mohammad Aamer.

Aamer had missed the Test series against Sri Lanka due to a shin injury. Pakistan might also give Umar Amin and Amir Yamin a chance to feature in the final T20I. Amin might replace either Ahmed Shehzad or Fakhar Zaman, while Yamin is most likely to come in for Imad Wasim.

Earlier, on Sunday morning, Sri Lanka side reached Lahore amidst heavy security. The third T20I will start an hour early, keeping in mind the weather conditions at Lahore. 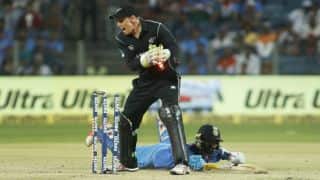