Lasith Malinga has 250 ODI wickets
Pakistan 284 | Overs 48.5
Junaid 1(1)
Malinga strikes. Fifer for him and he seals the match. Keeps it full and on the legstump, Ajmal fails to read it and is out leg-before. But the big wicket comes in the form of Bilawal Bhatti. Bhatti makes too much room and Malinga does what he does best, bowl it full bang on the off-stump. Pakistan lose by 12 runs.
OUT! Ajmal 10(4), Bhatti 18(13)
Pakistan 280/8 | Overs 48
Bhatti 15(10), Ajmal 10(3)
Bhilawal Bhatti gives a good start to the over thrashing a boundary though the covers off Lakmal. He picks a couple on the next delivery. Bhatti then plays to mid-off and picks a single. Ajmal then smacks one past mid-on for a couple. But Ajmal brings out a miraculous shot, tries to scoop and the top-edge flies behind the keeper for a four. Lakmal is bowling with too much pace. The last ball runs down for a boundary as well running past short thrirdman.
Pakistan 263/8 | Overs 47
Bhatti 8(7), Ajmal 0(0)
The first two deliveries of Malinga’s over fetches a single each, but Gul finds it difficult to hit the next two. He finally tries to work it away on the leg side, the ball takes a leading edge and goes high in the air, CHaturanga de Silva at backward point takes the catch. Pakistan need 34 runs in 18 deliveries.
OUT! Gul 2(6)
Pakistan 260/7 | Overs 46
Bhatti 6(5), Gul 1(2)
Thisara Perera comes in to bowl and Bhatti goes through with his shot and manages to clear the infield and get a boundary. Follows it up with a single off a slower ball. Gul manages to pick a single on the fifth ball. Pakistan need 37 runs in 24 balls.
Pakistan 254/7 | Overs 45
Bhatti 1(1)
The momentum has swung in favour of Sri Lanka again. Two wickets for Malinga in this over. Afridi smashes straight to cover where Chandimal did well to hold on to it, he hurt his fingers though. Malinga strikes in the phase where he’s the most dangerous. Misbah drags straight to deep squareleg, Senanayake didn’t have to move an inch.
OUT! Afridi 4(7), Misbah 73(84)
Pakistan 250/5 | Overs 44
Misbah 72(82), Afridi 3(4)
Perera to bowl. He bowls a slower delivery and Misbah pushes it away for two runs towards square-leg. But he is disciplined on the remaining balls giving away just four runs. Pakistan need 47 runs in 36 balls.
Pakistan 244/5 | Overs 43
Misbah 68(78), Afridi 1(2)
Lakmal comes in. The first delivery is guided away by Akmal towards third-man for two runs. Lakmal bowls one wide and Akmal goes after. He edges it to Sangakkara behind the wickets. Shahid Afridi is the new batsman in. He gets of the mark with a single towards long-on. 53 needed in 42 balls.
OUT! U Akmal 74(72)
Pakistan 240/4 | Overs 42
Misbah 67(77), U Akmal 72(69)
Akmal has literally snatched the momentum from Sri Lanka. Two more boundaries in this over by Chaturanga de Silva. Superb batting from Lakmal. 57 needed in 48 balls.
Pakistan 231/4 | Overs 41
Misbah 67(76), U Akmal 63(64)
Akmal completes his half-century and the hundred partnership comes up. Excellent batting display by Akmal, gets two fours and a six of consecutive deliveries in that Lakmal over. 16 runs from that over. The required rate has dropped down. 66 runs needed in 54 balls.
Pakistan 215/4 | Overs 40
Misbah 66(75), U Akmal 48(59)
A productive over from Pakistan’s point of view. After three singles in the first ha;f of the over, Akmal takes a calculated risk to loft Senanayake’s delivery over mid-on and gets a boundary. Pakistan need 82 runs in 60 balls.
Pakistan 206/4 | Overs 39
Misbah 64(72), U Akmal 42(56)
Tidy over from Lasith Malinga. Doesn’t allow Misbah the width to get away. Four runs from it. Pakistan need 91 runs in 11 overs.
Pakistan 202/4 | Overs 38
Misbah 61(70), U Akmal 41(52)
It was a good over from Senanayake. He had created a stumping opportunity as well bowling to Akmal. With just one run in the first four balls, the pressure was on Pakistan until Misbah again slogged the fifth for a six.

a couple of gavaskars getting ready for commentary. up with me next. pic.twitter.com/qRwBn4AWlE

Sri Lanka 57/1 | Overs 13
L Thirimanne 28(39), Sangakkara 12(13)
Fifty up for Sri Lanka. Sangakkara doesn’t allow Hafeez to settle down, uses his feet well to flick one over the in-field for a boundary. Sangakkara has completed 12,000 runs in ODIs playing for Sri Lanka.
Sri Lanka 49/1 | Overs 12
L Thirimanne 26(36), Sangakkara 6(10)
Thirimanne has been very good playing on the off-side. Change of ends for Junaid Khan. He provides enough width for Thirimanne to cut it past backward point for a boundary. He pulls the fifth ball towards deep mid-wicket for a single.
Sri Lanka 43/1 | Overs 11
L Thirimanne 21(33), Sangakkara 5(7)
After Gul and Junaid, Hafeez is back into the bowling, Thirimanne gets a single on the first delivery. Hafeez has done well to contain the batsmen, but now since the powerplay is over, the batsmen have oppotunities to place in the gaps and pick up the singles.
Sri Lanka 41/1 | Overs 10
L Thirimanne 20(29), Sangakkara 4(5)
Umar Gul continues and the fourth ball of the over is way above Sangakkara’s head, even Umar Akmal behind the wickets fails to catch it. On the fifth delivery, Thirimanne drives the away going delivery on the up and gets a boundary.
Sri Lanka 33/1 | Overs 9
L Thirimanne 14(24), Sangakkara 4(4)
Finally Junaid Khan is into the attack. Tidy first over, concedes just one run from it.
Sri Lanka 32/1 | Overs 8
L Thirimanne 13(19), Sangakkara 4(3)
Delivered with a cross seam by Umar Gul coming over the wicket and Perera is cramped for space, tries to drive at a good length delivery and is caught behind. Sangakkara is in the form of his life and starts off with a boundary.
OUT! K Perera 14(26)
Sri Lanka 24/0 | Overs 7
L Thirimanne 13(19), K Perera 10(23)
Hafeez continues and Thirimanne hits a lovely cover drive for boundary. Not much power behind it but pure timing.
Sri Lanka 18/0 | Overs 6
L Thirimanne 8(14), K Perera 9(22)
A close call for leg-before was rejected by umpire Johan Cloete. Gul got the ball to move into Perera, who was hit high on the leg. Gul has been impressive with the ball so far.
Sri Lanka 17/0 | Overs 5
L Thirimanne 7(13), K Perera 9(17)
Perera cuts Hafeez for a boundary as Sri Lanka add another four runs to their total. It’s been a steady start by Sri Lanka.
Sri Lanka 13/0 | Overs 4
L Thirimanne 7(13), K Perera 5(11)
Gul keeps it tight in the fourth over of the match. Only two runs scored off the right-arm Pakistan pacer.
Sri Lanka 11/0 | Overs 3
L Thirimanne 5(7), K Perera 5(11)
Perera cuts through the point region to get his first boundary of the game, off Hafeez. Four runs scored off the third over in the game.
Sri Lanka 7/0 | Overs 2
L Thirimanne 5(7), K Perera 1(5)
Thirimanne gets into the groove with a fine boundary through the covers off Umar Gul. Five runs come from the second over for the Sri Lankan side.
Sri Lanka 2/0 | Overs 1
L Thirimanne 1(1), K Perera 1(5)
Mohammad Hafeez begins the proceedings for Pakistan and produces an opportunity on the fourth ball of the over. The ball bounced more than Kusal Perera expected, and a leading edge fell away from Ahmad Shahzad on the first slip.

Sri Lanka captain Angelo Mathews won the toss and elected to bat against Pakistan in their first match of Asia Cup 2014.

Hello and welcome to the live updates of the first match of the Asia Cup 2014 between Pakistan and Sri Lanka at Khan Shaheb Osman Ali Stadium in Fatullah. This is Abhijit Banare and I will be bringing you the updates of this game.

Sri Lanka will be high on confidence after their bilateral One-Day International (ODI) series win against hosts Bangladesh. On the other hand, Pakistan will be returning to action after

Read the preview of the match here. 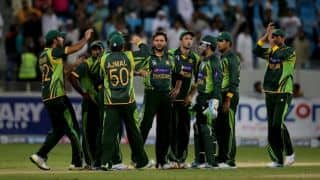