The live cricket streaming of Pakistan vs West Indies 2017, 3rd Test at Dominica, Day 5, will be available on Sony LIV.

With the penultimate Test going until the final day to look out for the decider, it’s visitors Pakistan, who get set to face off against hosts West Indies for one last time in the series, on day 5 of the third and final Test at the Windsor Park in Roseau, Dominica on Sunday. The live cricket streaming of the match will be available on Sony LIV, while the live telecast of the match will be available on Ten 1 HD and Ten 3. West Indies are still 297 runs short of a win, with nine wickets in hand. However, it would be interesting to see how West Indies fair with the bat, as the momentum currently seems to be in Pakistan’s favour. FULL CRICKET SCORECARD: PAK vs WI 2017, 3rd Test at Dominica

Pakistan without a shadow of doubt will be looking to go for wickets right from the first ball. It will be interesting to see West Indies approach. Do they go for the win or do they just play for a draw. Regardless, they have to be positive on the final day and look to get runs at every possible opportunity. Yasir will be Pakistan s main bowler on the final day. The ball is turning nicely and he will look to exploit it. It will not be surprising if Misbah-ul-Haq bowled part-time leg-spinner Azhar Ali. However, the fast bowlers too will have to play a vital role. PAK vs WI 3rd Test, Day 5 Preview: Visitors look to script history as Misbah, Younis bid adieu

Pakistan in their first innings had scored 376, largely due to Azhar Ali s brilliant 127. Misbah, Babar Azam and Sarfraz Ahmed too scored vital fifties. Chase was the pick of the bowlers with 4 wickets, while skipper Jason Holder finished with 3 wickets. 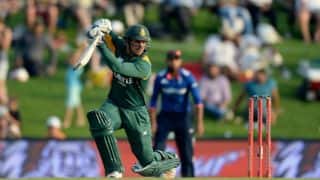