Pakistan have ended their first session of Day Two at the score of 401 for the loss of six wickets. Hosts have wicket keeper batsman Sarfraz Ahmed who is playing at 45 off 53 balls and all-rounder Mohammad Nawaz 16 off 45 deliveries at the crease. The day started off on a bad note for the hosts as they lost their captain Mishab-ul-Haq for the score of 96 as he was dismissed by pacer Shannon Gabriel who trapped the Pakistani skipper in his pads. The hosts also lost their nightwatchman Yasir Shah for 23 runs off 31 deliveries. The hosts have scored 97 runs in the first session for the loss of two wickets in the first session of the second day. FULL CRICKET SCORECARD: Pakistan vs West Indies, 2nd Test at Abu Dhabi

It was very much expected that the Pakistani skipper Misbah would get to his 11th Test hundred as he had batted quite flawlessly on Day One along with Younis Khan who was the last man for Pakistan to get dismissed on the score of 127. Younis got to his 33rd Test hundred as he surpassed Steve Waugh in the bid. On the other end, he had nightwatchman Yasir Shah who had not faced even a single delivery as after Younis Khan’s wicket the play was called off due to bad light. Starting today, the West Indian bowlers didn’t look on the money as they were spotted straying down the leg side making the batsmen score easy runs from around their pad region. Yari Shah was seen taking most of the strike and he was seen driving some excellent boundaries through the region of covers and midwicket. Yasir did survive one tough LBW call against Kraigg as the batsman had jumped to flick the delivery and the ball would have gone down the leg side. LIVE CRICKET UPDATES: Pakistan vs West Indies, 2nd Test at Abu Dhabi

But the situation worsened for the visitors when Gabriel removed Misbah a few overs later. The ball would have gone and clipped the leg stump which was pitching somewhere in middle and leg stump.

Yasir did hit some boundaries after his captain’s departure, but he was seen struggling against the short ball. The West Indies players seeing a chance to grab his wicket tormented him with shorter balls every now and then and finally they were rewarded with his wicket as captain Jason Holder got him to give an easy catch to Devendra Bishoo. Yasir had done his job as he played a short but entertaining cameo against the new ball as he scored 23 runs off 31 balls which were laced with four cracking boundaries. READ: Pakistan vs West Indies, 2nd Test: Misbah-ul-Haq becomes victim of nervous 90s

West Indies here had a golden chance of seeking dominance here as they had two new batsmen Sarfraz Ahmed and Mohammad Nawaz at the crease. But yet again they failed to contain the situation as they were seen bowling not so good according to the situation. They had some moments of grabbing the opportunity but nothing happening came out of it for them. Shannon Gabriel has been the pick of the bowlers for the visitors as he has picked up 3 wickets. Both Nawaz and Ahmed did look scratchy initially as the West Indian bowling was looking very dominant with Gabriel and Cummings bowling in tandem. But the visiting bowlers couldn’t stick to their line and length for a longer duration as they again started bowling in the leg side region which enabled both batsmen to settle down. Ahmed has been the leading partner in this partnership he has put along with Nawaz as he is batting on 45 and is just 5 runs away from his half-century which will also be his career’s 8th Test fifty. These both batsmen have put a partnership of 59 runs so far from 15.2 overs for the 7th wicket. 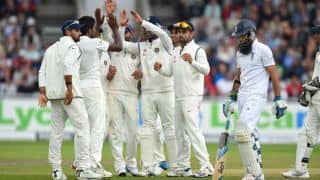