The ninth wicket stand between Dwayne Bravo and Jerome Taylor ensured West Indies did not end up with an embarrassing score.

Dwayne Bravo and Jerome Taylor register the highest partnership for the ninth wicket, putting on 66 in the first T20 International (T20I) at Dubai, going past the pair of Sohail Tanvir and Saeed Ajmal, who put on 63 against Sri Lanka in 2013 at the same venue. West Indies were struggling at 48 for 8 in the 12th over, before Taylor and Bravo joined hands. Bravo eventually got to his fifty and Taylor was dismissed in the final over, after he had made run-a-ball 21. Bravo too eventually fell for a well made 55 off 54 deliveries. Bravo had scored four boundaries and a couple of sixes in his innings, while Taylor struck a couple of crucial boundaries in his.

No batsman barring Bravo and Taylor managed to get into double figures as Pakistan kept picking up wickets regularly. Imad Wasim was the star for Pakistan as he finished with career best figures of 5 for 14, which never gave West Indies a chance. Wasim bowled extremely well even in England and has carried his good form into this match as well. Sohail Tanvir, Mohammad Nawaz and Hasan Ali too were among the wickets.

As far as the West Indies bowling is concerned, they were extremely ordinary and their fielding and catching too did not help their cause. Samuel Badree managed to get the wicket of Sharjeel Khan, but West Indies could not consolidate on it. They failed to pick up wickets at regular intervals, helping Pakistan cruise home to a nine-wicket won, with 34 balls to spare. 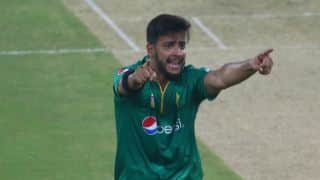