West Indies will need 251 runs to win against Pakistan in first day-night Test at Dubai on Day 5.

Fit-again senior batsman Younis Khan has returned to Pakistan’s 15-man squad for the second Test in the series against West Indies, selectors said Monday. The 38-year-old batsman — Pakistan’s highest Test run scorer with 9,456 in 108 matches — has fully recovered from the dengue fever which forced him to miss the first of three matches in Dubai. Chief selector Inzamam-ul-Haq said Younis was the only fresh inclusion. “We are satisfied with the performance of the squad so we feel there is no need for a change except to bring in Younis,” said Inzamam. The announcement means there is no place for discarded openers Mohammad Hafeez and Shan Masood, who both lost their places on the tour of England which finished in August. LIVE CRICKET SCORECARD: Pakistan vs West Indies, 1st Test at Dubai

Pakistan were in the driving seat after the fourth day of the first Test in Dubai — only the second ever day-night Test — as West Indies need 251 to win with eight wickets in hand. In the first Test so far, West Indies leg-spinner Devendar Bishoo took a career best 8-49 and his Pakistani rival Yasir Shah completed 100 wickets on Sunday as the first day-night Test was poised for an exciting finish in Dubai. Bishoo finished with 8-49 to wreck Pakistan to a paltry 123 in their second innings before West Indies — set a daunting 346 to win — finished the fourth day on 95-2.

West Indies will need another 251 runs for an improbable win while Pakistan’s hopes rest on Shah to take a 1-0 lead in the three-match series. Earlier it was Pakistani leg-spinner Shah who became the second joint-fastest bowler to take 100 wickets in Test cricket during his 5-121 which bundled West Indies out for 357 in their first innings. ALSO READ: Pakistan vs West Indies: Younis Khan to miss 1st Test

Pakistan, who scored 579-3 declared in their first innings, did not enforce the follow-on despite West Indies coming up 23 runs short of the follow-on target of 380. The second Test will be played in Abu Dhabi from October 21-25 while the third is in Sharjah from October 30-November 3. 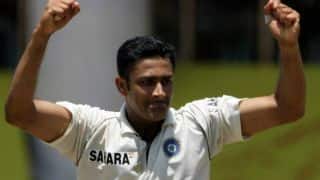 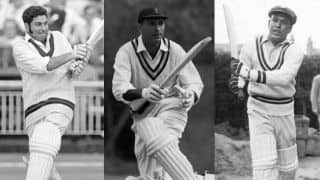