PCB issued a statement saying it was a power transformer blast.

At least four persons, including two policemen, were injured today in a blast here near the Gaddafi Stadium where a day-night match between Pakistan and Zimbabwe was underway. The cricket match was underway when the blast took place near the stadium at 9 PM, leaving at least four policemen injured who were rushed to nearby hospital where their condition was stated to be out of dangers. READ: Pakistan seal series by beating Zimbabwe comprehensively in second ODI at Lahore

The Pakistan Cricket Board (PCB) immediately issued a statement, saying it was a “power transformer blast” that was caused by malfunctioning. A couple of policemen received minor injuries, it said.

Police have cordoned off the area and no one is allowed to leave or enter the premises. Even media was not allowed to reach the spot. A Rescue 1122 official told PTI that at least four people had been injured in the blast. He, however, did not confirm whether it was a ‘cracker, suicide, or transformer’ blast. READ: Zimbabwe tour of Pakistan 2015: Visitors’ bowlers must come to the party

“We have shifted the injured to hospital. About the nature of the blast, the police will better tell you,” he said.

The Punjab government has given a “presidential” security to the Zimbabwe Cricket Team to ensure that no terror incident could take place during its tour. This is the first tour of any international cricket team in Pakistan since the attack on Sri Lankan Cricket Team by Taliban in March 2009 in Lahore’s Liberty Chowk (near Gaddafi Stadium) in which six members of the visiting team were injured. READ: Congratulations, Pakistan! Hope the Zimbabwe series is start of a new chapter in your cricket history

The Punjab police claimed to have extra-ordinary security measures to avoid any untoward incident. 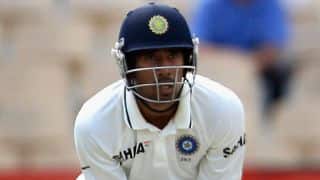 Wriddhiman Saha: Want to contribute as much as MS Dhoni did with the bat India requires a mentor rather than coach, says Sunil Gavaskar