With the recent win, Pakistan overtook West Indies in the ICC Women's Championship table and jumped from sixth to fourth place.

The Pakistan s women team created history on Monday after they sealed the third and final ODI by four wickets to pocket their maiden ODI series win against the West Indies women.

Pakistan women had defeated the Windies on Saturday by 34 runs to level the series 1-1. With the recent win, Pakistan have overtook West Indies in the ICC Women’s Championship table and jumped from sixth to fourth place.

In the all-important final at the ICC Academy Ground in Dubai, the Windies were skittled for 159 in 47.3 overs after opting to bat. Captain Stafanie Taylor top scored with 52, but received no support from the other end before she lobbed it back to Diana Baig on the last ball of the 37th over. Taylor s 95-ball stay at the crease was laced with four boundaries.

Deandra Dottin was the next highest scorer with 28 off 20, while Shemaine Campbelle added 26 off 43 to sum up what was a shoddy performance by the Windies.

For Pakistan, left-arm spinner Nashra Sandhu was the pick of the bowlers with three for 21 in her allotted 10 overs. Baig too snapped three scalps, but was a tad bit expensive, going for 42 in her eight overs at 5.25.

In reply, opener Sidra Ameen led from the front with 52 as Pakistan chased down the target with 16 balls to spare. Ameen s 107-ball knock was studded with five boundaries. Nida Dar was the next highest scorer with 26 off 51. 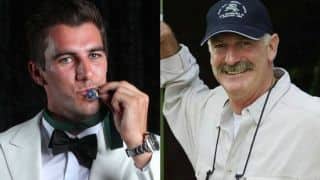