Cummins, who has 90 wickets in 19 Tests at 22.47, will be a vital cog-in-the-wheel for Australia at the World Cup in England and Wales later this year.

Cummins, who was rested for the one-day series against India along with Mitchell Starc and Josh Hazlewood, returned in the first Test against Sri Lanka to claim career-best and innings figures of 6 for 23 and 10 for 62 overall respectively to lead Australia to an innings victory inside three days in the first Test at the Gabba in Brisbane.

With momentum on his side, the 25-year-old pace gun is keen not to miss out on any more white-ball matches ahead of the ICC World Cup 2019. Australia travel to India in mid-February for two T20Is and five ODIs followed by five more ODIs against Pakistan in the UAE. Before boarding the flight to India, Australia face Sri Lanka in the second and final Test at Canberra on February 1.

“After the [Canberra] game there are two ODI tours and hopefully I am on them and a couple of T20s as well,” Cummins told ESPNCricinfo on Monday.

“ODIs are a lighter load than Tests and then most of April is off leading into the English summer so we’ll wait and see. Hopefully, I will play most of those but I had a good two-week break after the last series, so I feel pretty fresh.”

Cummins, who has 90 wickets in 19 Tests at 22.47, will be vital co-g-in-the-wheel for Australia at the showpiece event in England and Wales later this year. With his success this season, there is a strong chance that he might get to share the new ball with Starc, although he s content with Jhye Richardson sharing the role with the southpaw.

“Someone like Jhye, as soon as he came in, I was saying he has got a beautiful seam and has to get the new rock,” Cummins said.

“To be honest, I’m pretty happy with my role. I feel like our new-ball bowlers have always done a really good job. When Starcy is on, you just feel like he is going to rip through. You saw him against India, both their openers got dropped because we start off really well with the new ball. So, I’m always really happy to come on, itching to get the ball in my hand, but I am happy to wait a few overs.” (ALSO READ: Mitchell Starc ‘not far away’ from returning to his best Pat Cummins)

“I love to get the ball in my hands in those times but I think overall the new-ball bowlers always do a great job so my job hitting the deck. I do that pretty well and they open the bowling pretty well,” he said. 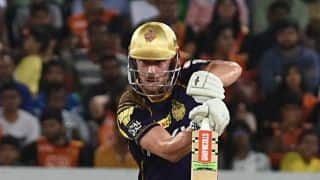 14 games is too many for Big Bash League - Chris Lynn