Cricket Board (PCB) chairman Ehsan Mani, who took over the reins from the incumbent Najam Sethi after Pakistan great Imran Khan was elected Prime Minister, has seeked ICC help to restore bilateral ties among all the countries.

Pakistan Cricket Board (PCB) chairman Ehsan Mani, who took over the reins from the incumbent Najam Sethi after Pakistan great Imran Khan was elected Prime Minister, is seeking ICC’s help to restore bilateral ties among all the countries.

The bone of contention has been Pakistan and India with Mani earlier making his stance clear when it comes to their arch-rivals playing in Pakistan territory.

“I have already talked about it, though informally, at the ICC level. But now I am in the PCB and I will raise it more effectively that the ICC should ensure the bilateral series among all the countries,” Mani told the ‘Dawn’ newspaper in an interview.

With regards to India, Mani had earlier said that he will not ask the BCCI to play Pakistan at all. However, Mani’s latest statement hints that he is still looking for an option for a bilateral series for Pakistan with India.

“Look, if there is no bilateral cricket series between India and Pakistan, why do they play us in the ICC tournaments?” he asked.

India and Pakistan have not been engaged in a bilateral series in any format since January 2013 but have faced each other 10 times in multilateral events.

The ICC’s dispute resolution committee is to give its verdict on a compensation claim of USD 70 million filed by the PCB against the BCCI.

The PCB has asserted that the BCCI did not honour a Memorandum of Understanding. The Indian Board has maintained that the MoU was not legally binding on it.

“Unfortunately, it has never happened in the history of the ICC that two cricket boards are fighting a case against each other. Had I been at the helm at the time of filing the case, I would have preferred to resolve the matter through negotiation,” Mani said.

Mani said the dialogue should have continued between the boards and it would have been good to involve the governments of the two countries for a solution.

“I played a key role in 2004 through dialogue and I also persuaded England to visit Zimbabwe after setting aside the political stance of their government about the situation in Zimbabwe at that time,” he said.

The PCB chief said that if Pakistan’s compensation claim is rejected by the ICC committee, he would continue to try to talk to India.

“My intention is not to beg for cricket but to talk with anyone on equal term. We are ready to play and we have to go with each other 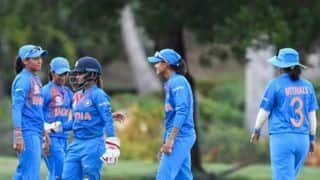