The Bangladesh cricket team escaped unhurt despite being in close vicinity of the shooting attack.

Karachi: The Pakistan Cricket Board (PCB) on Friday condemned the terrorist attack on two mosques in Christchurch that left at least 49 people dead. The attack also led to the cancellation of the Bangladesh team’s tour of New Zealand. (ALSO READ: Christchurch mass shooting: When terrorist acts impacted cricket)

The PCB expressed its grief and shock over the incident with the Peshawar and Islamabad franchise teams wearing black armbands during their match in the Pakistan Super League here.

In a statement, PCB Chairman Ehsan Mani said: “On behalf of the Pakistan cricket fraternity, I would like to condemn in the strongest possible way the cowardly, uncivilised and inhuman terrorist attacks on the innocent worshippers in Christchurch mosques.” (ALSO READ: Bangladesh team manager on Christchurch attack: We saw people running for their lives and blood everywhere)

The third Test between Bangladesh and New Zealand, which was to begin in Christchurch on Saturday, was called off after the terror attacks.

“Our hearts go out to all those affected by this tragedy who will feel and understand their pain and loss better than us. In these difficult times, we also stand firmly with our colleagues in New Zealand Cricket and offer our deepest condolences,” Mani added. The Bangladesh cricket team escaped unhurt despite being in close vicinity of the shooting attack. 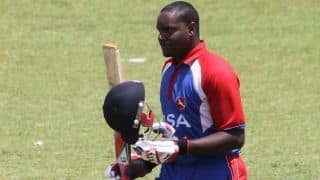