Pakistan and India are confirmed to play each other in 5 series in the next FTP cycle.

Pakistan Cricket Board (PCB) Chairman Najam Sethi said that it has signed an agreement with the Board of Control for Cricket in India (BCCI) to play three ‘home’ and two away bilateral series in the next cycle of Future Tours Programme.

Sethi said Pakistan had agreed to conditionally support the governance and financial overhaul in the International Cricket Council (ICC) after the BCCI entered into an agreement with the PCB on playing five bilateral series in the next FTP cycle.

“I don’t want to go into the details or make premature statements but India has signed agreements with all Boards, including Pakistan. We are looking at three ‘home’ and two away bilateral series with India in the next cycle of FTP under this agreement,” Sethi told a television channel.

He said the ‘home’ series meant that Pakistan may now host India even at a neutral venue which could be UAE or some other country.

“In the past, the Indian Board was not even willing to enter into any such agreement with us nor ready to play us at neutral venues but now we have got both things. And when the series approaches and Memorandum of Understanding is signed, then more details will be worked out between both Boards which will be beneficial to Pakistan cricket,” he said.

Sethi, however, said that nobody could give an absolute guarantee that an Indo-Pak series will take place at designated times given the nature of political relations between the two countries.

“At the end of the day, the political climate in both countries and existing relations decide the fate of a series.

But the positive thing is that we have got the Indian Board to an agreement with us that foresees at least five series in the next cycle,” he stated.

Sethi also indicated that Pakistan and India might even play a short series in a few months time at a neutral venue but did not give out specific details.

The PCB chief said that the Board was isolated at one time when the ‘Big three’ issue came up and had to extract the best deal to avoid the risk of being left alone and gaining nothing.

“We could have got more out of this issue but we let the opportunity slip out of our hands,” he added.

Sethi also stated that until there was at least 50 per cent improvement in the security situation in Pakistan, there was no hope of international teams touring the country in the near future.

“We are however working on this in our own way and recently we even sent a comprehensive security plan to the Scotland Yard and they approved it,” he said. 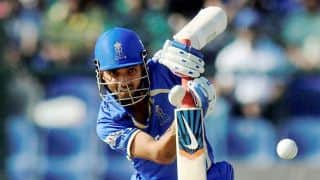