Handscomb grabbed his second century against Pakistan on Wednesday, becoming the second Australian after Herbie Collins in the 1920s to score more than 50 runs in each of his first four tests.

Sydney: Australia‘s Peter Handscomb could hardly fail to be delighted with a fledgling test career that has already brought two centuries but is realistic enough to concede that home conditions have played their part. The 25-year-old middle-order batsman grabbed his second century against Pakistan on Wednesday, becoming the second Australian after Herbie Collins in the 1920s to score more than 50 runs in each of his first four tests. “Any time you can make a test hundred is always going to feel amazing. It’s just been incredible,” Handscomb said. “It’s been a nice start and definitely something I didn’t feel was going to happen, taking that next step up to this level.”

“I’ve been very lucky in the way that I’ve come in, in my own conditions, in my own country, I have a good understanding of what was going to be coming at me. Had I debuted somewhere else it might have been a different story.” The son of English immigrants, Handscomb got his chance to show his composure and unorthodox batting technique at the top level when Australia overhauled their team after losing two tests to South Africa in November. He scored 54 on debut in the third test against the Proteas, a century and an unbeaten 35 against Pakistan in Brisbane and 54 in Melbourne in the second test victory.

Pakistan coach Mickey Arthur said the tourists had seen quite enough of him after a 110 in the third test on Wednesday. “It’s an interesting technique but it’s one that he seems very confident with, it’s one he plays very well with, he hits the ball very late, it’s under his eyes,” said the South African. “You always feel you’ve got a chance coming round the wicket at him but he generally scores very well off the leg side. We’ve tried a lot of things but he keeps coming up trumps.”

Handscomb’s fine form means he is almost a certainty to be part of the squad that heads to India in February for four tests, a series that will test his reputation for being able to play spin. “I love facing spin every time I get out there. No matter what wicket it’s on it’s always a challenge,” Handscomb added.

“It would be great if I face spin all the time. I enjoy that competition and it’s just awesome fun.” Handscomb’s innings helped Australia to a strong position after day two of the third test and the Victorian said he would not sit down to truly contemplate what he had achieved until after it was over. “It’s been awesome and I guess after this series I’ll actually have a chance to sit down and think about what’s happened and hopefully we’re coming away with a 3-0 win,” he said. 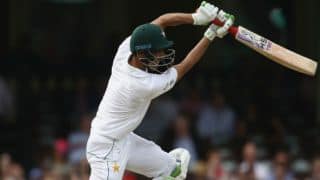