Despite the result and Cook’s own meagre returns with the bat, Moores threw his support behind the embattled skipper.

St. George’s (Grenada): England coach Peter Moores has defended his side and under-pressure skipper Alastair Cook after the visiting team were unable to seal victory on the fifth and final day of the first Test against the West Indies.

Cook’s side entered the final day needing eight wickets to win and had the home side reduced to 189 for the loss of six wickets with more than 50 overs still left to bowl — only for Denesh Ramdin (57) and Jason Holder (103 not out) to hang on for the draw on Friday.

Despite the result and Cook’s own meagre returns with the bat — 24 runs across both innings, Moores threw his support behind the embattled skipper.

“I have known lots of people in sport and, in terms of character, Cook is one of the strongest,” Moores was quoted as saying by cricket.com.au on Sunday.

“Even though he didn’t get a score here you could see he’s found some form with the way he’s hitting the ball and moving. It was frustrating, but he’s a very good player and it’s almost been forgotten how strongly he finished the Test summer against India,” the England coach said.

Cook’s opening partner Jonathan Trott is also under pressure after managing just four runs, including a second-innings duck, in the drawn Test.

“Trott has earned the right to get a go,” Moores said. Read: Jonathan Trott needs to earn his place back in England squad, says Peter Moores

“It was his first Test for a long time and that was always going to be tough but this is a player who has played some brilliant innings for England and he’s got a good chance now to show that he’s still got that ability,” he said. 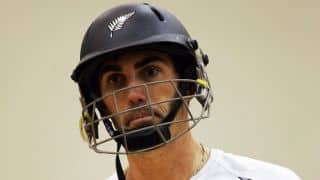