Siddle recently played two matches with Broad during his recent stint with the English county Nottinghamshire.

Australian fast bowler Peter Siddle praised England pacer Stuart Broad who was painted as the number one enemy of Australia during last Ashes series in England when he refused to walk despite clearly edging a ball to slip at Trent Bridge. As a result he was booed by the Australian crowd when England went to Australia to play the return series in 2013-14.

Siddle recently played two matches with Broad during his recent stint with the English county Nottinghamshire. “Even though everything that’s gone on between Australia and England, we’ve always been pretty close mates and we spent a lot of time together over there,” Siddle said on Wednesday.

He further added, “Australian people will probably hate me for that. But he’s good fun and I think playing alongside him, swapping stories and swapping different training things and techniques and just chatting about how he goes about it [has been enjoyable]. Obviously I learnt a few things about Jimmy [Anderson] as well and how he goes about it in his conditions. It’s always good to get the goss on some of those things. You talk to any international (no matter) what country they’re from, it’s always good to hear from other people who are doing what you’re doing.”

Both Broad and Siddle have something in common. They both trained under David Saker, former Victoria quick and current England bowling coach. “I grew up working with David Saker and he was pretty much my coach up until he left to go and coach [England]. From a coaching point of view, [England’s bowlers] are getting told the same stuff that I was getting told five years before them. In the end it was all pretty similar and pretty much the same stuff,” Siddle said.

Siddle played 11 matches for Nottinghamshire this season before returning home to Australia to prepare for a busy schedule ahead, which includes another Ashes battle against Broad next year. But off the field he expressed to spend time with Broad, his new teammate, in future as well. 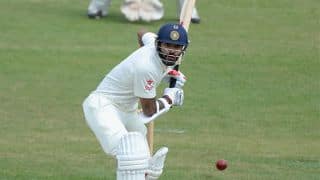