Phil Hughes was felled by a bouncer during a Shield game on Tuesday.

The Indian team have conveyed their best wishes to Phil Hughes, the Australian batsman who was injured during the Shield game between South Australia and New South Wales. On Tuesday, Hughes was felled by a bouncer by Sean Abbott and was taken to hospital, where he was operated upon. He is said to be in a critical condition.

India are in Adelaide to play the warm-up game against Cricket Australia XI. The statement was tweeted by Cricket Australia’s official Twitter account. “The touring Indian cricket team extends its best wishes to Phil Hughes and his family at this time we  join with the rest of the cricket community around the world to offer our support and prayers to Phil and his family as well as our friends within Australian Cricket. 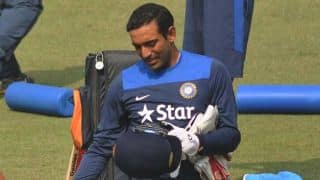