Bridgetown (Barbados): New West Indies head coach Phil Simmons says veteran batsman Shivnarine Chanderpaul did not “fit in” with the squad to face Australia in the two-Test series next month, and does not believe that his exclusion means he has been shabbily treated.

The 40-year-old Chanderpaul was on Sunday axed from a 12-man squad named for the Australia series, despite boasting 11,867 runs at an average of 51, with 30 Test centuries. Simmons said selectors did not see it fitting to pick Chanderpaul simply to offer him a farewell series, reports CMC. Shivnarine Chanderpaul dropped from West Indies squad to face Australia: Reports

“When we went through the process, he didn’t fit in so it’s not about giving someone two Tests to finish their career, it’s about picking the best team to play the next game.” Shivnarine Chanderpaul should be given special farewell, feels Dave Cameron

Chanderpaul averaged 48 when New Zealand toured the Caribbean for three Tests last year and then plundered 270 runs in two Tests against Bangladesh last September without being dismissed. However, he has managed just 183 runs from his last 11 innings in series against South Africa and England, prompting selectors to overlook him. Shivnarine Chanderpaul goes past Mahela Jayawardene in list of leading Test run-scorers

Responding to suggestions Chanderpaul had been shabbily treated, Simmons said it was now for the West Indies Cricket Board (WICB) to properly reward the long-serving batsman for his years of service.

“It depends on what you consider to be shabby. Players before were not recognised and lauded for their performances. But to say you have to play two Test matches for me to laud your performances over 164 [Tests] doesn’t make sense,” Simmons argued. Shivnarine Chanderpaul should call it a day

West Indies face Australia in two Tests, the first starting at Windsor Park in Dominica on June 3 and the second bowling off at Sabina Park in Jamaica on June 11. Shivnarine Chanderpaul resigns to fate? 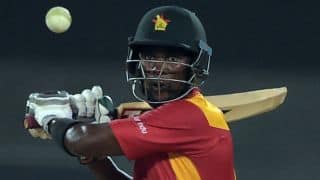