As international cricket has returned to Pakistan, it has already created immense hype. It is also being speculated that big teams are more or less set to tour the nation for bilateral series and revive the international cricket in the country in full flow. The visiting ICC World XI is currently playing in the country in a three-match Twenty20 International (T20I) series. During the third and final T20I at the Gadaffi Stadium in Lahore on Friday, cricketing fans expressed their desire to see Indian players MS Dhoni and ViratKohli in action in Pakistan, as they set up posters and banners displaying that they miss them playing. FULL CRICKET SCORECARD: Pakistan vs ICC World XI 2017, 3rd T20I at Lahore

The above mentioned Indian players have a long history and are on good terms with a few Pakistan players, especially ViratKohli. A few months back, Kohli had presented a signed cricket bat to former Pakistan skipper ShahidAfridi on his retirement. And it just not ends there,Kohli has been always vocal and has come out on support numerous times for Pakistan’s pace sensation Mohammad Aamer. Although Pakistan and India have been involved in intense rivalry in most aspects, including cricket, the friendly relation between the players of the countries is what inspires many in both the nations. FULL CRICKET UPDATES: Pakistan vs ICC World XI 2017, 3rd T20I at Lahore

The current World XI side has no players from India, a fact that has not gone well with the cricket fraternity. 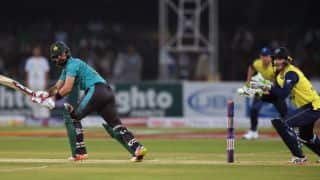