Nadeem was added to India's squad on the eve of the third Test after Kuldeep Yadav's injury.

Shahbaz Nadeem made his international debut as India took the field against South Africa in the third Test at the JSCA International Stadium Complex in Ranchi on Saturday.

While the left-arm spinner will have to wait for his turn to bowl, his wait to earn his India came to an end after being named in the playing XI.

Nadeem was added to India s squad on the eve of the third Test after Kuldeep Yadav s injury.

India s batting coach Vikram Rathour, after the end of the first day s play, said that Nadeem, who became only the third Test cricketer from Jharkhand after MS Dhoni and Varun Aaron, was rewarded for his consistent performances in the domestic cricket.

He has some 424 wickets in first-class cricket. He s a consistent bowler and of course, these are his own home conditions. I think it was selectors call and I think it was the right call as well, said Rathour.

Rathour said that the Indian team was looking to play spinners and with Kuldeep out with injury, Nadeem was picked.

Basically, we were looking to play spinners here. Kuldeep had some issues with his shoulder so he was ruled out. The selectors picked Nadeem because his performances speak for himself, said Rathour.

Nadeem had earlier received his India call-up in October last year for the three-match T20I series against West Indies. However, he did not get a chance to make his debut then.

The left-arm spinner was in the reckoning for some time because of his consistent showings in the domestic cricket, which saw him pick up more than 50 wickets in two successive seasons of Ranji Trophy and registering the best bowling figures in List A cricket. 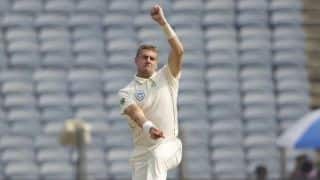